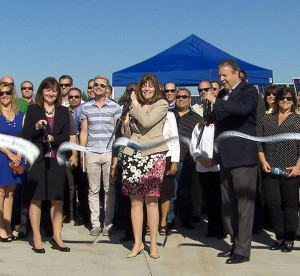 Just in time for summer — Carol Cala, Lockheed Martin Corporate vice president of Energy, Environment, Safety and Health, (left) Melani Austin, Lockheed Martin Skunkworks VP of Execution and Integration and Palmdale Mayor James Ledford cut a ribbon in celebration of Lockheed Martin’s new solar farm. Built on seven acres, the farm has the distinction of being one of the largest, single axis photovoltaic systems built on-site in an industrial location in Southern California.

As temperatures and energy cost rise, Lockheed Martin Skunkworks in Palmdale, Calif., is doing their part to not only conserve energy, but to create it.

“Lockheed Martin has a very strong commitment towards sustainability and environmental stewardship, as such we actively set GO Green goals on carbon, energy, water and waste reduction to be reached by 2020,” said Melani Austin, Lockheed Martin Skunkworks vice president of Execution and Integration.

“This is an active goal from our corporation, we really believe in doing the right thing — this is evidence of our actions,” she said speaking of the new solar farm built on seven acres of land.

By building their own solar farm, Lockheed Martin will produce 1 megawatt of power and provide eight to 10 percent of Site 10 needs — “that is pretty impressive,” said Austin.

The farm has the distinction of being one of the largest, single axis photovoltaic system built on-site in an industrial location in Southern California. The panels track the sun and converts DC current to AC current before it goes to the grid, so energy is produced in real time.

“Because the Antelope Valley has about 300 days of cloudless skies, it is a superior place to use this type of engineering and energy,” explained Rowena Striff, Lockheed Martin Energy Manager.

Saving costs on utilities means the company saves in other places as well. It is estimated that the company will save more than $350,000 a year in energy. Lockheed Martin also has a solar plant in Clearwater, Fla.

“I couldn’t be more proud of everyone at Lockheed,” said Palmdale Mayor James Ledford who said he has worked at the site before it had gates. “I’ve been able to see the transformation of this facility over the years … today is another demonstration of the efficiency of what Lockheed Martin is bringing to the facility and community.”

Dropping energy use makes Palmdale more competitive, enabling them to keep costs down and to bid on more programs. “It is good for the entire valley,” said Ledford.