PALMDALE, Calif.–Children at risk and recovering from abuse in the Antelope Valley may never know it, but some of the good angels who swooped in to try and provide them with brighter days include aviation troops and pilots of the Royal Air Force and the Royal Navy.

On the occasion of the 90th birthday of Queen Elizabeth II, the members of 17 Squadron RAF and their Royal Navy comrades hosted “a little birthday party” at the Rancho Vista Golf Course.

In the course of the evening, Her Majesty’s finest presented $5,000 to Kids Charities of the Antelope Valley.

He said the United Kingdom forces agree “that it should never hurt to be a kid.” The result of Kids Charities cumulative $4.3 million distributed over the years is “happy, healthy, hearty children,” Beck said.

CEO Emard responded, “This is going to do a lot for the children of the Antelope Valley.”

The funds distribution came from money raised during 17 Squadron’s recent centenary that was celebrated at Club Muroc at Edwards Air Force Base, Calif., themed on a salute to the 17 Squadron members who flew Hawker Hurricanes to defeat the Nazi Luftwaffe led by Hermann Goering during the Battle of Britain.

The RAF squadron that hosted the birthday party is just a decade older than the Queen herself, formed in 1916, and deployed to the Middle East during World War I. 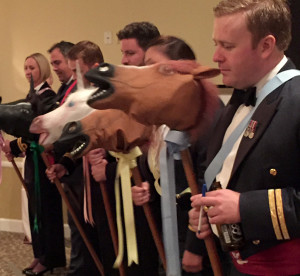 It might be surprising to younger and older alike that Queen Elizabeth is now 90 years old, her reign beginning with the last days of the British Empire lasting longer even than that of her great great grandmother, Queen Victoria.

“You might be surprised to know that she is not the Queen of England,” Wing Cmdr. Beck said. “That title ended in 1707 with Queen Anne. Actually, she is the British Monarch.”

For a room filled with friends, and the formally outfitted uniforms of the RAF, the Royal Navy, and also representatives from the U.S. Air Force and Army, the entire group was treated to some facts and figures about the queen’s reign.

At the dinner, officers and non-commissioned officers of all services wore formal “mess dress,” with decorations. Members of a British-American society in the guest list wore kilts, with mess jackets, and ornamental knives in their long stockings. Among those attending was retired U.S. Army Maj. Gen. Peter Gravett, who headed up the California Military Department until retirement last year.

The queen’s reign, Beck explained, began formally in 1952 when the monarch was 25 years old. She already accumulated worldly experience during World War II, when as a teenager, she joined the British army and served as a driver and mechanic.

At 90 years, Wing Commander Beck said the queen continues “simply as one of the hardest working people in Britain.”

The Queen, he said, has patronized more than 600 charities, and served as chairperson of more than 400 of them.

She has personally dispatched 175,000 telegrams, and answered 3.5 million pieces of correspondence during her record-smashing reign, now as the monarch who “reigns but does not rule” over the Commonwealth of Nations, which span six continents and a quarter of the earth’s surface.

Although Queen Elizabeth was born on April 21 “in a posh residence” some 90 years ago, the “birthday of the Monarch” is celebrated in June “because it simply rains too much in April” in the British Isles, Beck said.” 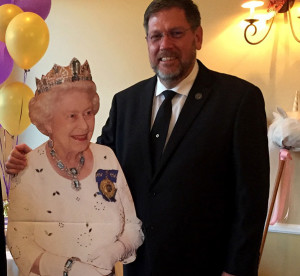 A cake set in the corner of the Rancho Vista dining room featured a cameo of the queen with the dates, 1926-2016.

“Actually, she has sent 3.5 million, and one,” piece of personal correspondence, the wing commander shared proudly.

On the occasion of her 90th birthday celebrated at “Rancho Vista Golf Course, Palmdale, California,” the queen sent hearty thanks and good wishes to “all the members of 17 Squadron, and all those in attendance.”

Among those gathered June 11, champagne glasses were raised in a simple toast.

“Ladies and gentlemen … To the Queen.”

The men in stiff collars, mess jackets, medals and some in kilts raised their toast, alongside the women in gowns and finery, and women of the RAF and Royal Navy in formal uniform.

Personally signed, on her own letterhead, Queen Elizabeth’s congratulations to her RAF troops from a Battle of Britain legacy unit will be framed and put up “on our squadron wall.”

“She does not always send these,” Wing Commander Beck said. “This is the only party in my life where I have been ordered by the Queen to have a good time.”

Among the guests was Scott Ferguson Greene. Greene’s credential, established by genealogy and DNA, place him as a 17th cousin of Queen Elizabeth.”
Greene’s card introduces him as “Royal Descendant,” and a member of the “Royal Steward Crown of Scotland, Clan Fergusson of North America.”

“I’m here because it is my family and I deeply respect the monarch.”

She was, he added, a “kind and honorable monarch.”

A series of races themed on the famed Ascot event featured papier mache broomstick ponies in a time honored salute to the whimsy, fun and games known to the unit members of a military mess in the British armed services.

The broomstick ponies were named in an Ascot-style race track tout sheet, some with more British names like “Hogwarts” and “Brummie’s Best.”

In the first race, the ponies had names that would be more familiar to the American “cousins” of the former colonies.

With dinner guests astride them, the first race featured names like “Bernie,” the “Golden Wrecking Ball,” “Cruz Control” and “Little Marco.”

All for charity “and a little fun at the expense of your American election,” Beck quipped.

The United Kingdom forces stationed at Edwards are in the test groups putting the F-35 Lightning II joint strike fighter through its paces. No papier mache. No broomsticks.