One of the chapter’s first action was to recognize Tibor “Ted” Rubin, Medal of Honor recipient, by naming the chapter in his honor for bravery and service to the United States of America.

The chapter will celebrate its first meeting as a chartered nonprofit at its July 20, meeting.

The chapter began as an idea between two Las Vegan Korean War veterans, Fidel Diaz, 83, Purple Heart Recipient and Ed Katz 86, at a veteran’s luncheon at the Suncoast Hotel in early fall of 2015.

This began the process of forming the nonprofit chapter.

“It is important that we not forget our fellow veterans and the Korean War which is rapidly becoming forgotten in American History,” said Diaz.

The Korean War (June 25, 1950-July 27, 1953), which was also labeled as the Korean Conflict, is commonly referred as “The Forgotten War” because it was sandwiched between the much longer and larger wars – World War II and Vietnam. The Korean War was critical to American foreign policy and blocking expansion of communism. Geographically, South Korea is bordered by communist North Korea and nearby communist Russia and China.

To reinforce and remember the reason why the U.S. fought to protect the Korean Peninsula, the chapter’s charter certificate states, “World’s First Defenders Against Communism.”

Commander Chuck Johnson, twice awarded Combat Infantry Badge recipient, explained that the chapter is working with the Ambassador of South Korea to honor select chapter members with the “Korean Ambassador Peace Medal” in commemoration of the 63rd anniversary of the end of the Korean War, July 27, 1953.

According to Johnson, the chapter goals and objectives are to support the national program “Tell-America,” which seeks to educate junior and high school students about the history of the Korean War; present patriotic programs and displays reminding Americans that, “Freedom is not Free;” and support the national (KWVA) pursuit of an acceptable resolution to the fate of the 8,177 MIAs (Missing in Action) from the Korean War. Also, assist all veterans, including homeless who are patients in Las Vegas area hospitals and clinics, and provide social and recreational activities for fraternal gatherings for KWVA veterans, their families and friends. 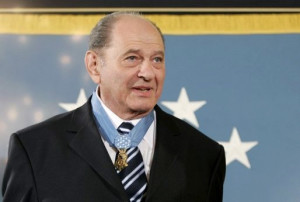 The KWVA chapter’s namesake, Cpl. Tibor Rubin, received the Medal of Honor from President George W. Bush at a White House ceremony Sept. 23, 2005.  The medal is awarded to those who displayed “conspicuous gallantry and intrepidity at the risk of life and above the call of duty.” Rubin was the 18th  Jewish recipient of the medal since it was created by President Lincoln during the Civil War. Rubin was a child prisoner in a Nazi concentration camp for 14 months during the end of World War II. He then fought in the Korean War were he was taken prisoner by the Chinese communists for 30 months. Rubin was born in Paszto, Hungary in 1929 then moved to New York City in 1948. He died Dec. 5, 2015, at the age 86 of natural causes in Garden Grove, Calif.

“The KWVA chapter meets the 3rd Wednesday of every month at a restaurant in Summerlin, and we welcome all Korean War veterans and their families and friends. We have a social lunch followed by a general meeting,” said Johnson.

“This Chapter will do everything in its power to prevent the Forgotten War from being forgotten,” said Johnson.