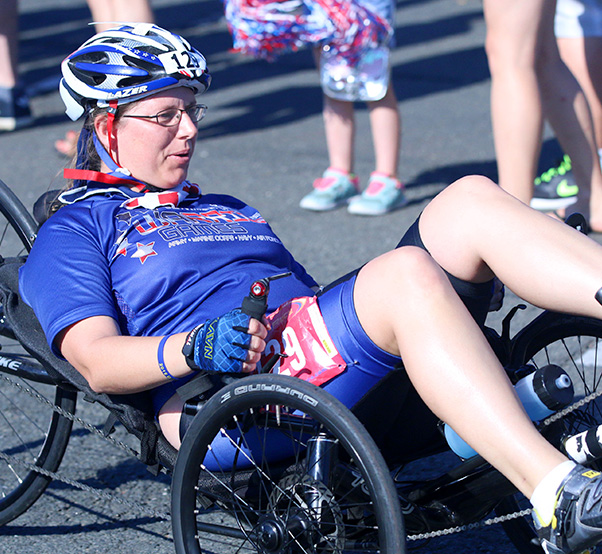 Navy veteran Kathleen Ray, of Palmdale, Calif., sets up at the starting line before the beginning of her cycling race at the 2016 DOD Warrior Games at the United States Military Academy at West Point, N.Y., June 18. 2016.

Katie Ray glides through the water, arms slicing and feet kicking, churning a wake of bubbles and ripples in the swimming pool at Arvin Gym. She practices swim strokes, trying to improve her time and technique, but what she’s really doing is finding the person she used to be.

The Navy veteran is looking for healing and recovery in the swimming pool and on the track at the United States Military Academy at West Point, N.Y., during the 2016 DOD Warrior Games held from June 15-21.

Ray has been an athlete for Team Navy since 2013. The games have been a major part of her journey to become the person she was before a traumatic brain injury took away nearly everything, including her life.

“I was crushed because my life was ripped away from me,” she said. “But I didn’t let it stop me. I was very determined to be the person I was.”

Ray served in the Navy for seven years as an aviation electronics technician. The 29-year-old lives in Winchester, Ky., but grew up in Palmdale, Calif., which was a hotbed for contractors involved in the design and building military aircraft. So it wasn’t a stretch for her when she joined the Navy and trained to work in aviation electronics.

“I worked on the C-9B plane from nose to tail, everything electronics,” Ray said. “I knew my job and I was good at it.”

Ray was happy with her job, and her life in the Navy. But that all ended when she suffered a severe head injury. Part of her skull was removed, and later re-attached, to allow surgeons to perform multiple brain surgeries. She spent a month in a coma and when she woke up with amnesia, she had to re-learn basic tasks. 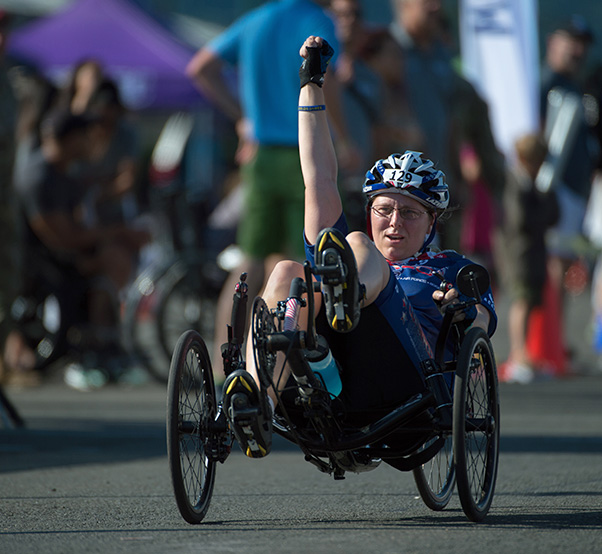 “When I woke up, I was in a wheelchair and I had to learn to walk again,” Ray said. “They said I could not walk, talk or think for myself.”

Ray entered rehabilitation, physical and occupational therapy. She learned to walk and talk again, but still struggles with cognitive impairment caused by her brain injury. She said it’s as if her brain sometimes can’t talk with the rest of her body.

“The first year I did this, it looked like I was going to drown, becuase of the whole issue of the mind speaking to the body,” Ray said.

She found out about the Warrior Games through the Navy Wounded Warrior — Safe Harbor program. She jokingly calls it her “mistake” to swim a mile and a half in almost nine minutes flat. Her skill as a swimmer caught the attention of the coaches, who thought she should compete in the DOD Warrior Games. Ray said she had always enjoyed swimming and calls the water her “happy place.” Competing in the DOD Warrior Games, a paralympic-type event for wounded, ill or injured service members and veterans, has brought Ray a new sense of recovery and comfort. 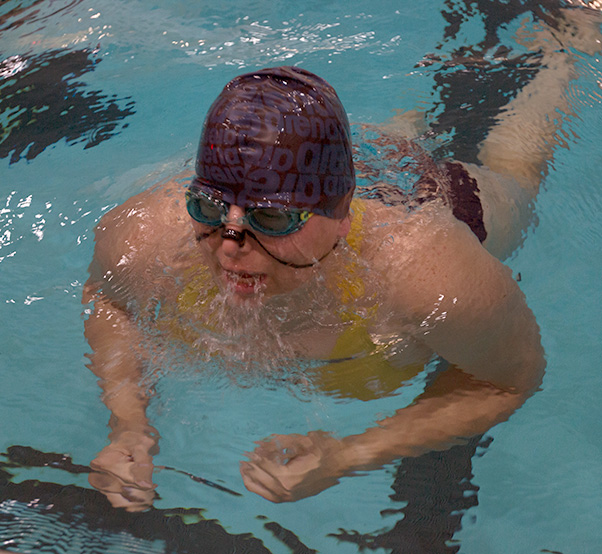 Navy veteran Katie Ray emerges from the water in the swimming pool at Arvin Gym at the United States Military Academy at West Point, N.Y., on June 12 during swim practice in preparation for the 2016 DOD Warrior Games. The games will be held June 15-21, 2016.

The camraderie with other warriors who have suffered injuries or illness has been important for Ray.

“We’re the same group, we’re all warriors,” Ray said. “It’s nice to know there are a lot more people just like me I can talk to.”

Ray’s road to recovery includes self-improvement through education. She is studying environmental science and natural resources at the University of Kentucky with the dream of becoming a park ranger.

The road to recovery for wounded warriors like Ray is a journey to overcome a body that is no longer whole. But thanks to the DOD Warrior Games and the support and spirit of friendly competition, Ray is steadily making her way back to the person she was before.

“You may not be able to do all of the things you once did, and you may get really upset, because you can’t do them,” Ray said. “But if you let it get the best of you, you can’t move on.” 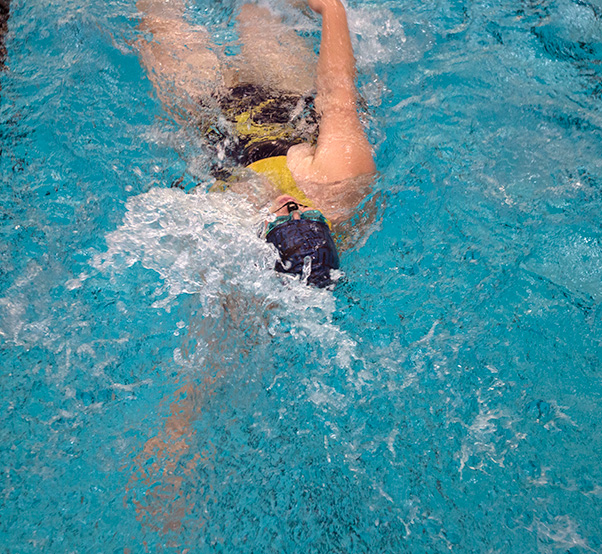 Katie Ray glides through the water, arms slicing and feet kicking, churning a wake of bubbles and ripples in the swimming pool at Arvin Gym. She practices swim strokes, trying to improve her time and technique, but what she’s really doing is finding the person she used to be.