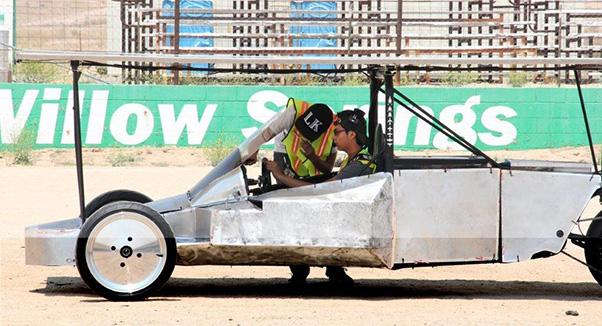 The Solar “Falcon” race car team from Palmdale High School are calculating and making preparations for their upcoming competition — The Solar Car Challenge. Students from across the country will deliver their cars to the Texas Motor Speedway in Fort Worth, Texas, and, if they qualify, they will then drive from Fort Worth to Minneapolis, Minn. The competition runs July 17-23. Palmdale is one of two schools from California selected to join the competition.

With only a few weeks left, The Solar “Falcon” race car team from Palmdale High School are busy preparing “Falcon 2.0” to compete in The Solar Car Challenge — a race from For. Worth, Texas, to Minneapolis, Minn., July 17-23.

Testing battery power, brakes and making a few adjustments at Willow Springs International Raceway, the team is confident they will do well to make the race.

“I think we are doing pretty good; just a few more tweaks and a wrap covering, and we should be good,” said Bryan Alcatraz, captain of the team.

Plenty of sunshine in the Antelope Valley does not mean the route from Texas to Minneapolis will be all sunny, so team drivers must adjust speed so that their batteries don’t run critically low should they encounter a cloudy day or many hills.

“I’m really proud of our team,” said John Calvert who teaches agricultural mechanics, welding and fabrication, and is a mentor for the team. “These kids are working non-stop to assure everything is as good as it can be.”

During the challenge, team members will drive their cars approximately 150 miles each day. Through high traffic areas, the cars will be transported via trailers. 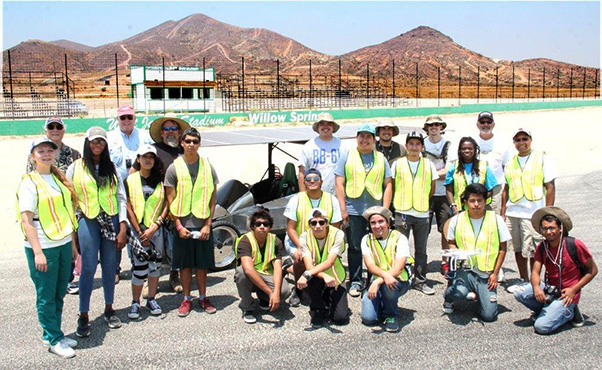 The Team: The Solar “Falcon” race car team from Palmdale High School pose after testing at Willow Springs International Race Way. Students from across the country will deliver their cars to the Texas Motor Speedway in Fort Worth, Texas, and if they qualify, will then drive from Fort Worth to Minneapolis, Minn. Science & Technology Magazine named the Solar Car Challenge as one of the top science and engineering programs in the country.

“It does take a lot of people to pull this together,” said Jamie Ellen Stapp, who was making sure students had sunscreen, hats and water during the testing. Unfortunately, the new graduate will miss the big competition because she will be heading to Ervine to study nursing.

Volunteers Randy and Terry Scott will drive ahead of the team and set up lunches along the way at pre-designated stops.

Supporting education for more than 20 years, Randy, a retired engineer who was the Director of Plans and Design at Edwards Air Force Base, heard of the team during a Skills USA educational program and wanted to support the team.

“To see all that the students do — is pretty amazing. The students here today will no doubt be part of a team that will change the way we power cars in the near future.”

Mike Manghelli works production control for Lockheed Martin, and is a proprietor and crew chief for White Goose Bar Racing. Lockheed Martin has donated materials and supports Manghelli in helping the kids.

“We are hoping some day they will come and engineer for us,” said Manghelli who also races at Bonneville and El Mirage. “I think we learn from them as much as we teach them.”