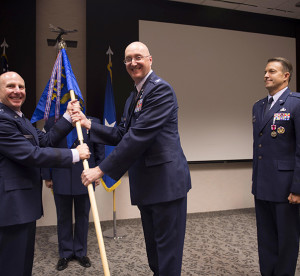 Col. George Tromba took the reins of the 412th Mission Support Group at Edwards Air Force Base, Calif., during a change of command ceremony held at the Airman and Family Readiness Center July 8, 2016.

Leshinsky heads to a new assignment at Arnold Air Force Base, Tenn.

The group’s commander directs force protection, communications, civilian and military administration, supply transportation, fuels and deployment activities as well as morale, welfare and recreation services. He is also the liaison to the local school district, Army & Air Force Exchange Service and the Defense Commissary Agency. He will lead a workforce of more than 1,300 people.