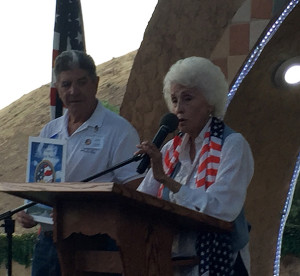 Leaders of the Edwards Air Force Base Civilian Military Support Group believe they have a good story, and they want to make sure it’s one of the greatest stories ever told about the Air Force Test Center.

And if the Marines are looking for a few good men and women, Civ-Mil founding member Aida O’Connor is looking, still, for a few more good sponsors.

Telling the story about the Civ-Mil book that is a work in progress became a focus of the group’s annual summer barbecue held in its traditional hillside canyon location at Lane Ranch.

Hundreds of Edwards’ boosters, which included businesspeople, civic leaders, elected officials and Edwards and NASA personnel, turned out for an evening of perfect weather, and a perfect midsummer’s night for hearing a tale about the world’s premier flight test facility.

“I just want to thank you all for what you do, and for all the people, and for our community,” said Brig. Gen. Carl E. Schaefer. “I just always make a point of telling everyone I meet that we have the most outstanding community support of any base in the U.S. military.

The purpose of the book, Civ-Mil President John Fergione said, was to “tell the story of Edwards,” and in particular to tell the story of 25 years of support for the Air Force Test Center by the Edwards Civilian Military Support Group, best known in the community simply as “Civ-Mil.”

“We are going to have a book where everybody can learn something about Edwards,” O’Connor said. She quipped, “For all of those who have not called me already, I will be calling you.” 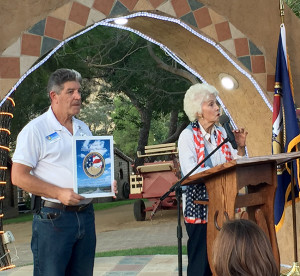 Fergione, retired as a test pilot who flew the F-22, said, “I tell people I’m here because I can’t say ‘no’ to Aida O’Connor.”

It was O’Connor who went on an out-of-area base visit where she heard about a Civ-Mil style support group. That was in 1989.

The purpose of the group has been fulfilled through the years as “a friendly, benevolent association of civic leaders and military personnel at Edwards Air Force Base and to act as a host group whenever needed.”

Recently, the group hosted members of the Royal Air Force and the Royal Navy at Rancho Vista Golf Course in observance of the 90th birthday of Queen Elizabeth.

The group also does an annual service project, and currently is working on shifting the base Medal of Honor recognition space from an often bypassed area of the installation to a place of honor with more accessibility.

Honored guests
Among those attending was a member of the House Armed Services and Aerospace committees, Rep. Steve Knight, R-Palmdale. Also, attending along with Brig. Gen. Schaefer was Maj. Gen. David Harris, who commands the Air Force Test Center.

According to his official Air Force biography, as commander of the Air Force Test Center, Harris directs a $31 billion enterprise of more than 18,000 military, civilian and contractor personnel across Edwards AFB, Eglin AFB, Fla., and Arnold AFB, Tenn. The AFTC provides developmental test and evaluation of experimental and research manned and unmanned air, space and cyber systems for military services, DARPA, NASA and international partners, in addition to operation of the U.S. Air Force Test Pilot School.

Knight spoke to the gathering of more than 200 supporters about initiatives on behalf of veterans, and also the future of aerospace. 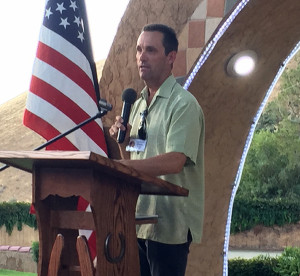 Magnetic EEG/EKG-guided Resonance Therapy technology has successfully treated more than 400 veterans with post-traumatic stress disorder, traumatic brain injury, military sexual trauma, chronic pain, and opiate addiction.Recent clinical trials and randomized, placebo-controlled, double-blind studies have produced promising measurable outcomes, Knight said. The one-year program will be overseen at five VA medical centers, one of them being Greater Los Angeles VA Healthcare Center.“It looks promising, so we have hope for it,” Knight said, adding that the prior tests have had a 98 percent success rate in reducing symptoms for veterans, with 61 percent of the veterans tested reporting improvement from severe levels of trauma.

“We want a murmur instead of a boom,” he said.

Additionally, Knight hailed the NASA budget which increased its “A” funding (for Aeronautics research) to 3.6 percent of the NASA budget.
The colors were presented by the Order of the Arrow, a fraternal order often referemced as the “National Honor Society” of Boy Scouts.