The nuclear triad still is seen as a critical deterrent against aggression by U.S. adversaries, but all speakers during a U.S. Strategic Command meeting panel July 27 also discussed the need for deterrence in the cyber and space domains, and the Middle East.

In his remarks, Haney, who said deterring strategic attack on the United States and assuring its allies is his top priority, spoke about the challenging strategic landscape and the importance of maintaining strategic stability in the 21st century. But he also discussed Stratcom’s attention to space and cyber.

“Our nation’s strategic nuclear deterrent force remains safe, secure and effective and ready, and we’re working hard to improve resiliency and flexibility in space and cyberspace,” he told the audience.

“In response to increased threats we are strengthening our cyber defenses and increasing options available in case of strategic attack,” he added.
About Eucom, Scaparrotti also noted that deterrence is multidomain.

“In the cyber domain Eucom stood up the Joint Cyber Center,” he said, “and following the U.S. lead, NATO has recognized cyberspace as an operational domain. Allies have pledged to strengthen their networks and integrate cyber defense operations into operations and planning.”

Deterrence challenge
In his remarks McKeon said DOD is renewing its focus on integrating conventional and nuclear planning and operations because of “recent developments in how we see potential adversaries preparing for conflict.”

Today the department faces a deterrence challenge in what is sometimes called the gray zone at the low end of the conflict spectrum, he said. 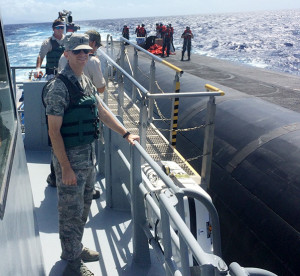 Gray zone confrontations occur just below the level of armed conflict but involve military-backed coercion. Groups in the gray zone can use individually small steps in aggression “such that an open confrontation against one act may seem out of proportion but taking no action will yield an unacceptable outcome,” McKeon said.

Having credible conventional capabilities is a key requirement for taking effective action, he added.

“We are safest and our military most effective when we can credibly establish a deterrent force across the entire spectrum of possible military operations in all domains. We must also consider how to assure stable and effective deterrence in the face of increased competition in space and cyber,” the undersecretary said.

Space, cyber
Space has played a role in U.S. deterrence since the dawn of the space age, and today’s space systems continue to support strategic missions while enabling military forces to project power globally, McKeon said.

Space capability has multiplied the speed, effectiveness and impact of a conventional response that allows the nation to respond swiftly and decisively to aggression without using nuclear weapons, underpinning the U.S. conventional deterrence posture, McKeon added.

“We can raise the cost against any potential attacker by a variety of means, including combining our space forces with those of our allies, and increasing military costs by creating space systems that force an adversary up the escalatory ladder — a ladder he may not wish to climb,” he said.

In the face of this threat the department is transforming its space architectures and operations to assure the use of space capabilities and services, McKeon said.

In the cyber domain the department confronts a range of state and non-state actors. Traditional deterrence theory does not always apply to non-state actors and attributing cyberattacks can be difficult, McKeon said.

“As in space we depend on this domain for operations [but] we are still learning our way around this domain both in strengthening our defenses and in building up the cyber mission forces that will provide the backbone for the future,” he said, noting that the department is making investments now in funding, manpower, training and thought work to prepare for the future.

Deterrence in the Middle East
In his remarks, Votel described what deterrence does for Centcom.

It prevents situations and confrontations from elevating into open conflict, the general said. It helps influence and change behavior and decision making, helps assure allies in the region and other partners who have vital interests there, helps provide a mechanism for deescalating in the region, and it helps contribute to stability, he added.

Deterrence plays a critical role in the combatant command’s comprehensive approach to security and stability across the area of responsibility, Votel added.

There are “three ways I think about deterrence and how we are working to achieve the effects of deterrence in conjunction with a variety of other things that we have going on in this region,” Votel said.

Two is by building partner capacity and capability, the general said, for example in working with coalition and indigenous partners on the ground, through exercises, through the U.S. Foreign Military Sales program and through professionalism and institution building with partners in the region.
Three, he said, is through fostering long-term relationships, including military-to-military relationships, throughout the region.

“Deterrence is a key aspect that’s built into a lot of how we approach this very complex and oftentimes troublesome region of 20 countries,” Votel said. “It plays a critical role in what we do.”