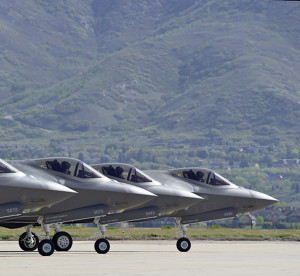 Four F-35A Lightning II aircraft prepare for takeoff at Hill Air Force Base, Utah. The F-35A is expected to reach “initial operational capability” sometime in the early part of the August to December window, at which time it will be combat-ready.

Airmen of the 388th and 419th Fighter Wings at Hill Air Force Base, Utah, have been hard at work preparing the aircraft for combat readiness since receiving the first operational F-35A Lightning IIs in September 2015.

Gen. Herbert “Hawk” Carlisle, commander of Air Combat Command has said he expects the jet to reach “initial operational capability” sometime on the “leading edge of the August to December window.”

Aircrew, mission
Currently, the wings have 21 combat-ready active and reserve pilots who have been putting the aircraft through its paces during training sorties at the Utah Test and Training Range and a deployment to Mountain Home Air Force Base, Idaho in June.

“The combination of the stealth and sensor fusion have really blown me away. We can be everywhere and nowhere at the same time. We can cover so much ground and airspace, but the F-15s or F-16s we’re going up against don’t know where we are,” Watkins said. “They can’t see us and they can’t target us. It’s a pretty awesome feeling to know that your pilots are bringing an unfair fight. That’s really what we’re looking for.”

All the pilots have deployed either live or inert GPS and laser guided munitions against ground targets and the aircraft are performing well in a basic close air support role.

“We’ve had really good feedback from the (special forces on the ground) we’ve been working with over the course of our CAS training,” Watkins said.
As a multirole stealth fighter, the F-35 can perform basic close air support missions, air interdiction and limited suppression of enemy air defenses.

“That’s where our capability really comes into play. We can detect (SAM) threats and take those threats out, negating them for the follow on forces, while doing close air support at the same time,” said Watkins. “(In training) the only reason the ‘enemy’ could track us is because we basically told them where we were and said ‘try to shoot at us.’ We were still able to take out the surface threats. They were only able to fire on us a couple times and they were what we’d call ‘low-probability of kill’ shots…with both low and high-end surface threats,” Watkins said.

These mission sets will expand with the weapons suite as the program matures, Watkins said.

Aircraft and modifications
The 388th FW currently has enough deployable aircraft, equipment and spares required to fill a six-ship deployment.

Twelve of the 15 operational F-35As at Hill have received the required modifications and software upgrades to deploy. The modifications included a fuel-system upgrade that allows for higher “G” limits and another provides protection against lighting.

“These modifications had to be done on our existing fleet, but all of these mods are being implemented on the production line and by the time we get our 25th aircraft those will be done,” said Lt. Col. Steven Anderson, deputy commander for the 388th Maintenance Group. “That’s the beauty of concurrent development. Part of the reason we’ve done a low-rate initial production is because feedback from the initial unit gets put into the production line.”

The aircraft have also received software upgrades which corrected radar instability issues that popped up with the initial fielding of jets. Because of their progress in the past 10 months, Airmen expect the improvements and capabilities will only continue.

“I went through F-35 training about a year ago and the jets we’re flying now are very different from the jets I learned to fly on at Eglin AFB just 12 months ago,” Watkins said.

Maintenance and systems
There are currently more than 220 F-35 maintainers at Hill AFB and that number will continue to grow as 78 jets are delivered through the end of 2019 when three F-35 squadrons are stood up.

The current cadre is a “dream team” said Anderson — maintainers hand-picked by the Air Force from Luke AFB, Ariz., and Eglin AFB, Fla., where the Air Force began training Airmen and testing the aircraft.

It takes roughly 12 months to transition a fourth-generation maintainer to a fifth-generation platform and at full strength, there will be approximately 1,600 maintainers. While it will be a challenge, Anderson said, there is an extensive plan in place and he doesn’t foresee any shortfalls in maintainers or pilots.

The current version of the Autonomic Logistics Information System is fully deployable and improvements are in the works.

“Capability wise, we’re (where we need to be),” said Capt. Richard Palz, 388th Maintenance Squadron operations officer. “Can there be improvements, can there be increased efficiencies? Of course, and those are programmed in and some of those are being made with input from the field, which is the great thing about concurrent development, but there is nothing that we lack at all for a deployment.”

An IOC declaration is just “the starting gate” for the wings, said Anderson, but Airmen are excited for the future.

“It is a really good time to be at Hill AFB. This is a once in a lifetime opportunity to bed down a new weapons set and make it employable for the defense of our nation,” he said. “Even the youngest people in this program feel like they are making contributions that will last throughout the life of this aircraft.”