NASA engineers and visionaries watched as the Tecnam P2006T – the future all-electric X-57 Maxwell – was uncrated at a small airport on the central coast of California, and slowly rolled out.

The arrival marks a critical milestone in NASA’s Scalable Convergent Electric Propulsion Technology and Operations Research (SCEPTOR) project, in which the electric propulsion integration and conversion of the Tecnam into the X-57 will commence.

The aircraft, which will be converted into the first manned X-plane to feature a distributed electric propulsion system, was shipped from Naples, Italy, and arrived at Empirical Systems Aerospace’s (ESAero) facility at Oceano Airport, near Pismo Beach, Calif., July 19.

Upon arrival and unveiling, engineers from NASA’s Armstrong Flight Research Center, and Langley Research Center, many of whom have been working on the distributed electric propulsion project for several years, got their first look at the aircraft.

“We’re all really excited. We get to see in person what we’ve been modeling for so long,” said Sean Clarke, principal investigator for the X-57 project out of NASA Armstrong. “We’ve been looking forward to this for years now, so there’s been a lot of anticipation, and to have it out here in front of us is a relief.” 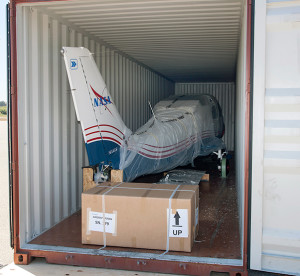 The Italian Tecnam aircraft fuselage, P2006T, arrived in California and will be integrated with the wing for electric propulsion becoming X-57, or Maxwell.

Upon arrival, the P2006T underwent a thorough inspection, followed by weight and balance testing. The testing occurred at ESAero, who is the prime contractor for the X-57 project. Having the aircraft in front of them allowed engineers to verify the modifications that had been made to the design during the fabrication process, which will make integration of the electric propulsion system possible.

ESAero Vice President of Operations Trevor Foster, who is involved as the company’s principal investigator on X-57, says the excitement level has reached new heights since the aircraft’s arrival.

“I’ve never worked on a NASA X-plane before, this is a very exciting experience for me,” Foster said “It has become very real for everyone to actually have some hardware to touch. Everything up until now has been on paper and photographs, so everyone is very excited, and looking forward to the next several years.”

Once final inspections at ESAero are complete, the aircraft will be transported to Scaled Composites in Mojave, California, where it will be located for the first modification into a fully electric airplane with the stock Tecnam configuration. This will allow the team to validate the safety of the all-electric power system and 2 large motors in flight before the new wing is integrated. The planned final version will feature twelve small electric propellers along a high-aspect ratio wing’s leading edge, and two larger electric cruise motors out on the wing tips.

The experimental, high-aspect ratio wing is being designed at NASA Langley in Virginia, and fabricated by Xperimental LLC in San Luis Obispo, Calif. The wing’s 12 small electric propellers will be used to generate lift during takeoff and landing only, while the two outboard motors will be used during cruise. 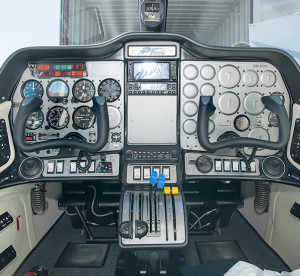 The Tecnam P2006T cockpit for the X-57, or Maxwell, will be the first all-electric propulsion aircraft once the plane and wing integration is complete.

The wing will be integrated onto the fuselage once the electric power validation flights are complete. The vehicle will be powered by a battery system, developed by Electric Power Systems of the City of Industry in California.

The current phase of integration is a power system risk reduction for the final configuration. This Includes replacing the two inboard reciprocating engines with electric motors, which are under development by Joby Aviation in Santa Cruz, Calif. Once the electric integration for this phase takes place, the aircraft will undergo ground tests to analyze the system. Flight tests for this initial modification are planned for the spring of 2018.

X-57 is the result of research and testing done through the Convergent Aeronautics Solution’s (CAS) sub-project SCEPTOR, which falls under the Transformative Aeronautics Concepts Program. NASA’s goal of meeting and overcoming the challenges of today’s aviation starts with potentially revolutionary ideas, and CAS was instrumental in supporting the idea of zero-carbon-emitting distributed electric propulsion.

“I am very excited that NASA Aeronautics has started the Convergent Aeronautic Solutions project where cross-center teams can propose revolutionary ideas that if feasible, can graduate that new technology into one of the mainstream aeronautics projects for further research and validation,” stated NASA Armstrong Deputy Aeronautics Research Director Starr Ginn. 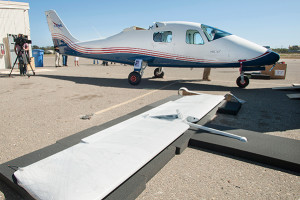 Preparations are underway to inspect, weigh and balance the Tecnam fuselage before it heads to Mojave, Calif., for wing integration.

“Unboxing the airplane today was an exciting milestone for those of us who have been advocating for several years the need to design, build and fly an electric airplane, and understand the system integration challenges, technology gaps and showcase a new area of vehicle design space with distributed electric propulsion.”

SCEPTOR will become the first CAS sub-project to graduate to the Flight Demonstrations and Capabilities project under the Integrated Aviation Systems Program, and X-57 will be the first of a series of increasingly larger electric aircraft in support of the New Aviation Horizons initiative.