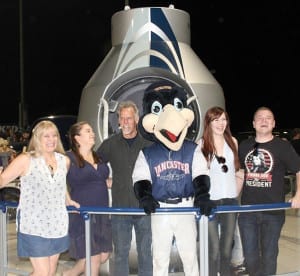 Roberta Thompson, Kasiri Landon, Art Thompson, Kaboom, Emily Thompson and Jake Nelson have a little fun in front of the Red Bull Stratos Capsule during Aerospace Appreciation Night at JetHawk Stadium. Art Thompson of Sage Cheshire worked on designing, building and testing a similar capsule that brought Austrian skydiver Felix Baumgartner to the edge of space in 2012, where he jumped 127,852 feet and reached speeds of 843.6 mph. The event had more than 3 billion Google viewers. Landon and Nelson are pilots with Sky West Airlines and as youngsters, they learned to fly while soaring over the Antelope Valley.

Nothing brings a community together quite like baseball, hot dogs and aerospace bobble heads.

Throw in a world renowned space capsule, photographs autographed by famous test pilots and it doesn’t get much better.

The annual aerospace event recognized the Red Bull Stratos Jump project, the accomplishments of Sage Cheshire Aerospace, Inc., including company co-founders, Art and Roberta Thompson. Mr. Thompson was the technical director for the jump, and responsible for designing and building the Red Bull Stratos Capsule.

On Oct. 14, 2012, Austrian skydiver Felix Baumgartner flew in to the stratosphere over New Mexico in a helium balloon, before free falling to Earth, reaching speeds of more than 800 miles per hour. He broke the sound barrier and set three world records.

“This is our favorite game night,” said Katina Jensen after her son, Ryan, 8, received “super cool” pictures autographed by test pilots. “It’s one game we definitely try to make.”

Traveling from Glendale, Jensen said her son became interested in becoming a pilot after an air show when he was four years old. “To see Mr. Thompson here with the Red Bull Capsule was way over the top — he was so friendly and personable — I think I was a little star-struck,” Jensen chuckled.

Thompsons also own A2ZFX, a company that specializes in custom fabrication for aerospace, the movie industry and private clients. They also debuted their JetHawk Baseball Bullpen car that they designed and fabricated in their Lancaster shop. 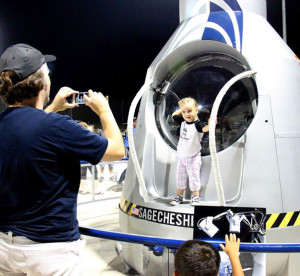 Pop that pose — A little girl gets her photo taken by her father during Aerospace Appreciation Night at Jethawk Stadium on the Red Bull Stratos Capsule. Art Thompson of Sage Cheshire, designed and built the capsule, and hopes that displaying it, and the JetHawk Baseball Bullpen helmet car, will help encourage youngsters to study hard to become engineers, scientist, pilots and astronauts.

“You read about these people in magazines, they are in history books and here they are — right here — that is pretty amazing,” said Jensen.

The first 1,000 guests received free bobble heads of Felix about to leap out of the Red Bull Stratos Capsule, which was also designed and produced by A2ZFX.

“Aerospace is such an important part of this community and the Antelope Valley,” said Mr. Thompson. “It’s great to see the JetHawks supporting our Aerospace community’s achievements, past and present.”

Everyone at Sage Cheshire was very proud to be honored and delighted to show their creations.

“With the display of the capsule, bobble heads and our car, we really hope to continue to inspire the next generation of kids to excel and strive to become tomorrow’s engineers, scientists, test pilots and astronauts,” explained Thompson. “I just think it is sad that a visually impaired man and a six-year old kid can out pitch me!” he joked, referring to his “first pitch” of the game.

Festivities began with Posting of the Colors by the Civil Air Patrol, an F-18 flyover and the National Anthem sung by a group of aerospace workers, Zero Gravity. Guests enjoyed watching the JetHawks crack the Modesto Nuts, 13-8 and capped the evening with fireworks. 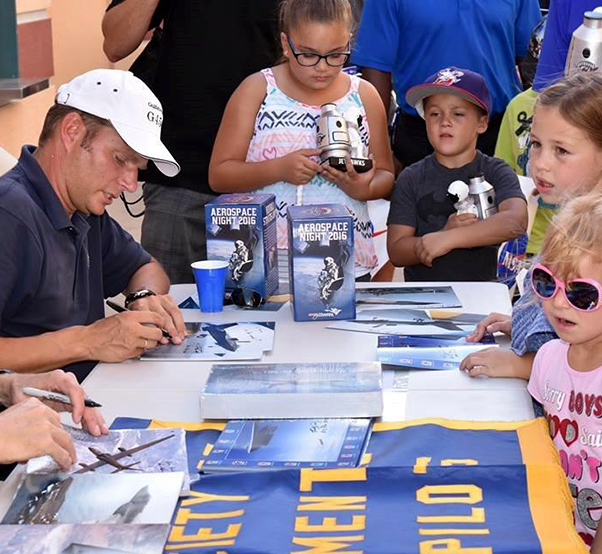 Kids of all ages collect photographs autographed by test pilots at the annual Aerospace Appreciation Night at JetHawk Stadium. The 2016 honor recognized Art and Roberta Thompson of Sage Cheshire for their work on the Red Bull Stratos project.