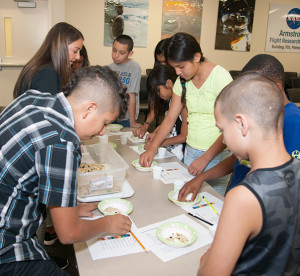 Students combined rice, beans and sprinkles to create a universe trail mix demonstrates the role of the Big Bang Theory, fusion in stars and supernovae to better understand which elements from the periodic table make up our Universe.

NASA’s Juno spacecraft launched Aug. 5, 2011, and arrived at Jupiter five years later on July 4. The mission’s focus is to gain a greater understanding of Jupiter’s origin and evolution as well as further study of its atmosphere beneath the dense clouds that have shrouded it from previous spacecraft observations.

Students are participants in a summer program arranged by the Torres Martinez Desert Cahuilla Indians. The organization named the Temporary Assistance For Needy Families, TANF, creates opportunities in education, economic development, social services and other aspects of life for tribal members in Southern California. 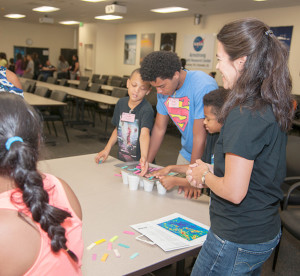 Students used cups of hot and cold water covered with a baking sheet to map out hot and cold areas on the sheet with labels creating a thermal image map representing different temperatures.

Barbie Buckner, Armstrong education specialist, started the workshop with an overview of the agency’s Juno mission as well as other space related content. Buckner is a NASA Solar System Ambassador who served as the workshop’s subject matter expert.

“Most of the students participating in the workshop were toddlers when Juno first began its trip to Jupiter five years ago, so it was important to really start back at the beginning and then explain what NASA hopes to achieve with the Juno mission,” said Buckner.

The workshop also featured four hands-on activities. One activity showed how the agency uses an infrared camera that has ultraviolet light to study the atmosphere of other planets, stars and regions within our galaxy.

In an activity called detecting clouds using only infrared energy, the students used cups of hot and cold water covered with a baking sheet to map out hot and cold areas on the sheet with labels. Using their hands they demonstrated how a satellite’s infrared detector created a thermal image map representing different temperatures.

Students also able to build their own Juno spacecraft as well as use Universe Trail Mix, a combination of rice, beans and sprinkles, to understand the role of the Big Bang Theory, fusion in stars, and supernovae to better understand the elements from the periodic table that make up our universe. 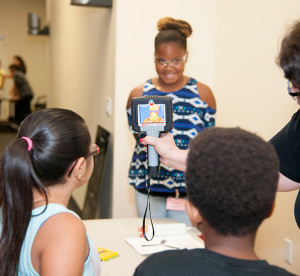 Students use infrared camera to understand the composition and temperatures of their classmates.

The workshop concluded with the students having rare opportunity to tour many of NASA’s airborne science aircraft such as the DC-8 flying laboratory, the ER-2 and the C-20A aircraft.

Sixth-grader Jose Baeza said, “My favorite part about today was learning about what’s happening and what people are doing to make the world a better place.”

When asked what he wants to be when he grows up, Jose says, “I want to be a scientist and work in chemistry.”