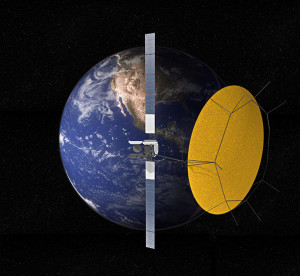 An artist rendering of one of the Mexsat satellites built by Boeing, part of the overall Mexsat system Boeing designed, integrated and delivered to the government of Mexico.

Boeing has delivered one of the world’s most advanced satellite communications systems to Mexico, one that opens high-speed data and voice communications to the entire country including some previously unserved areas.

After successfully completing its final tests, the Mexsat system was today formally accepted by the Ministry of Communications and Transportation.

Mexsat provides 3G+ voice and data services to mobile terminals on land, air and sea, enhancing the country’s national security, civil and humanitarian programs. The system is operated by Telecomunicaciones de Mexico (Telecomm) on behalf of the government.