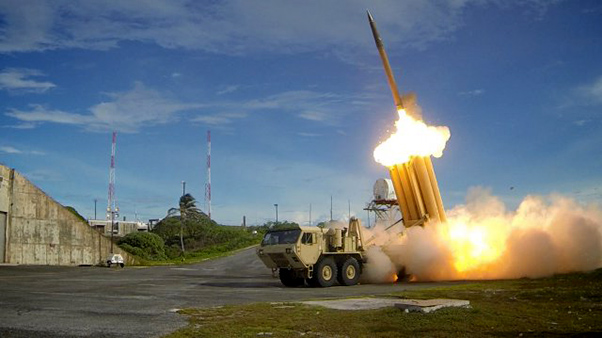 The Army could use its capabilities, including its missiles, to help shape the battlefield for the Air Force and Navy, said Tom Greco, deputy chief of staff, G-2, Army Training and Doctrine Command. Greco spoke at a Mad Scientist media roundtable, Aug. 23, 2016.

The U.S. Army is considered the world’s premier land force, but it also has the capability to play a greater role in shaping other domains like sea, air, cyber and space.

“We won’t duplicate capabilities of the other services. We want to enable the other services.” said Greco, deputy chief of staff, G-2, with the Army Training and Doctrine Command, in his remarks at a Mad Scientist media roundtable on Tuesday, Aug. 23.

Mad Scientist is an annual event at which members of academia, industry and interagency partners from around the U.S. and the world gather to discuss the character of warfare through 2050.

During the media roundtable, the G-2 told his audience that he can foresee a time in the near future when Army ground-based systems will be used to create favorable conditions for the Navy and the Air Force, citing several examples.

For instance, he said, Army forces could launch missiles against enemy naval vessels or attack threats in the air. The Army could also create windows of opportunity for the Navy to move through maritime choke points.

In addition, Greco predicted, the Army could augment Air Force capabilities to help open air avenues of approach, and the Army’s cyber and space capabilities could provide a layer of protection for the other services operating nearby.

The Army has already used air power during the Gulf War and the 2003 invasion of Iraq “to set the conditions for land operations,” according to Greco. In the future, the Army will need to engage in the other domains to increase the effectiveness of the joint force.

Such a transformation will require a revision of the traditional Army mindset, he added.

“That gets back to the culture,” he said. “We no longer can think solely ‘land domain.’ We’ve got to take a greater level of synchronization across all of the services within a joint umbrella.”

The U.S. Army isn’t alone in the world in its drive to perfect operations across domains, Greco explained. Russian separatists in the Ukraine have created a very robust air defense umbrella.

“They’re essentially dominating the air from the ground,” he said. “Because of that, it’s very difficult for Ukrainians, or anyone else, to fly over that part of the Ukraine.”

Russians in Syria, he added, are synchronizing ground and air operations at a level we haven’t seen previously.

Arctic meltdown
Another topic Greco discussed at Mad Scientist was the effects of climate change on the future operating environment. In particular, discussion focused on the Arctic region, which has been melting at an increasing rate, particularly over the last several decades.

On the plus side, if the Arctic ice cap were to retreat and open a Northwest Passage, the U.S. and other countries could benefit from greater trade opportunities, he said. But international conflict could arise from the contesting of natural resources.

“We’ve noticed that the Russians have beefed up their capabilities to operate in the Arctic,” he said.

He concluded: “That’s an interesting aspect of the future operating environment … The environment literally could change the way the military has to operate.”