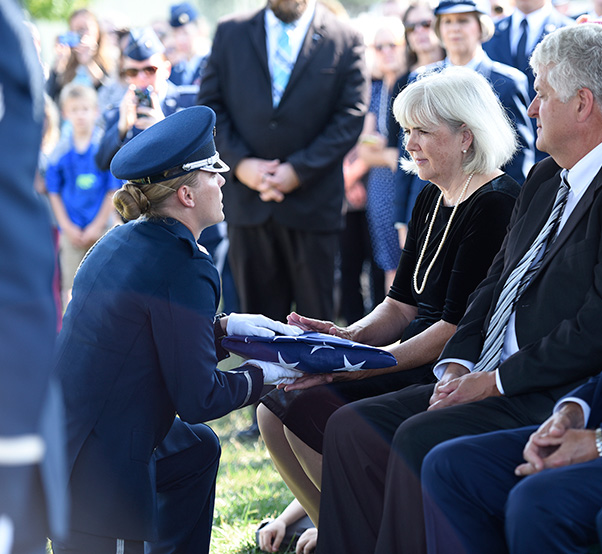 Terry Harmon, the daughter of Women Airforce Service Pilot 2nd Lt. Elaine Harmon, receives the American flag from a member of the U.S. Air Force Honor Guard during her late-mother’s interment ceremony at Alrington National Cemetery, Va., Sept. 7, 2016. Harmon died in 2015 at the age of 95.

In 1943, Mabel Rawlinson, a Women Airforce Service Pilot, died in an aircraft crash. The government would not pay for her remains to be sent back to her family, nor allow her to have a flag draped over her casket.

Her fellow WASPs passed around a hat, pitching in to have her casket shipped back to her family – flag-draped in defiance, and escorted home by her service sisters.

She was one of 38 WASPs to die in service to her country.

Along with Rawlinson, Harmon was one of 1,074 women to serve as a pilot during World War II, fulfilling what the Air Force Historical Research Agency called a “dire need” to train male pilots and ferry aircraft overseas. 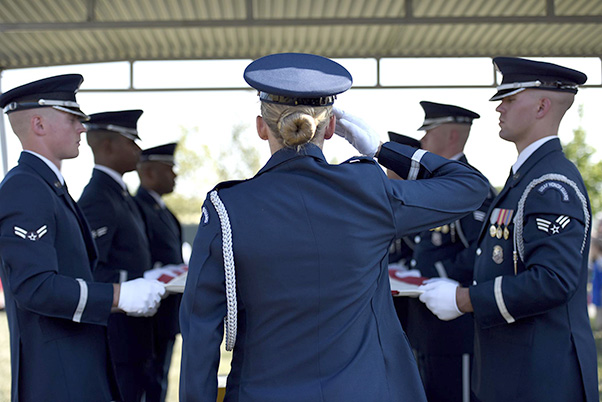 Members of the U.S. Air Force Honor Guard provide full military honors for the late 2nd Lt. Elanie Harmon, one of the original Women Airforce Service Pilots, during a ceremony held in her honor at Alrington National Cemetery, Va., Sept. 7, 2016. Harmon died in 2015 at the age of 95.

She is the first WASP to be buried in Arlington since the passing of HR-4336, a bill introduced by Arizona Representative Martha McSally to ensure WASPs eligibility for interment at Arlington National Cemetery. When Harmon passed away April 21, 2015, her family applied for her interment at Arlington per her final wishes. The request was denied based on a legal decision that “active-duty designees,” such as the WASPs, did not meet eligibility requirements for the cemetery, which is quickly running out of burial space.

Since then, her ashes had remained in the black box provided by the funeral home, sitting amidst folded sweaters, old photos and hanging clothes in her granddaughter’s closet.

Since her death, her family fought to secure a place for the WASPs in Arlington, aided by members of the self-proclaimed “Chick Fighter Pilot Association,” female pilots who owe their success to the trailblazing efforts of the WASPs.

After the passing of the bill, several of the female aviators proudly flew the burial flag during their missions. They documented the flag’s travels in a journal read during the memorial service. 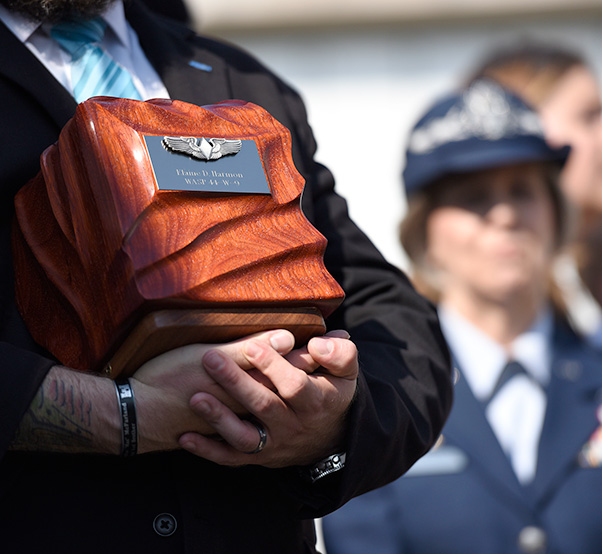 The flag “went on a journey worthy of a WASP,” according to Lt. Col. Caroline Jensen, an F-16 Fighting Falcon pilot who aided the family’s campaign.

“Because of the legacy of the WASPs and the service of women like Elaine, I stand before you,” she said. “I’m a reservist on active duty, 22 years in the Air Force, 3,500 hours flying fighters, 1,700 in an F-16, 200 in combat, three years as a right-wing pilot for the U.S. Air Force Thunderbirds and eight of those while being a mom. So we owe a lot to Elaine and the women like her.”

Jensen was joined by McSally and retired Maj. Heather Penney, each of whom credited their success as female pilots to the WASPs. They gave their remarks alongside beaming photos of Elaine — decked out in her flight suit at the ages of 22 and 85, demonstrating her continued love of flying.

“You could tell that the time they were WASPs was one of the best times of their lives and they were very proud to have served their country,” Elaine’s daughter, Terry Harmon said.

Retired Gen. Henry “Hap” Arnold once spoke to a class of graduating WASP and said that initially he hadn’t been sure “whether a slip of a girl could fight the controls of a B-17 in heavy weather. Now in 1944, it is on record that women can fly as well as men.”

“It was a man’s world, but we did something really great that was needed for the war effort,” Elaine had said during an interview for Library of Congress historical archives. 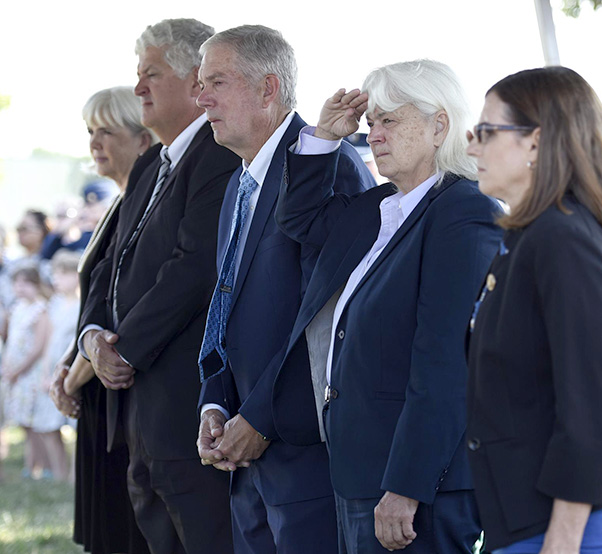 The family of one of 2nd Lt. Elaine Harmon, an original Women Airforce Service Pilot, stand during a ceremony held in her honor at Alrington National Cemetery, Va., Sept. 7, 2016. Harmon died in 2015 at the age of 95.

Elaine wanted people to remember that effort, and in her handwritten will, beseeched her family to place her ashes in Arlington National Cemetery.

“To her, Arlington is more than a cemetery, it’s a memorial for all the people that have served their country,” said her granddaughter, Erin Miller.

Seventy-two years after her fellow WASP died in service of country and was denied military honors, Elaine Harmon died among her family. More than a year later, her children and grandchildren, her fellow WASPs and her service daughters escorted her home.

“For generations to come, when they come to these hallowed grounds that honor our heroes and educate people about their service and sacrifice … these women will be in that history book on their own merit, on their own right,” McSally said.

Another trailblazer was laid to rest among her brothers and sisters-in-arms. Her urn was placed in a niche of the columbarium wall between her fellow veterans, she left her final mark on the white marble: “Elaine Danforth Harmon, WASP.” 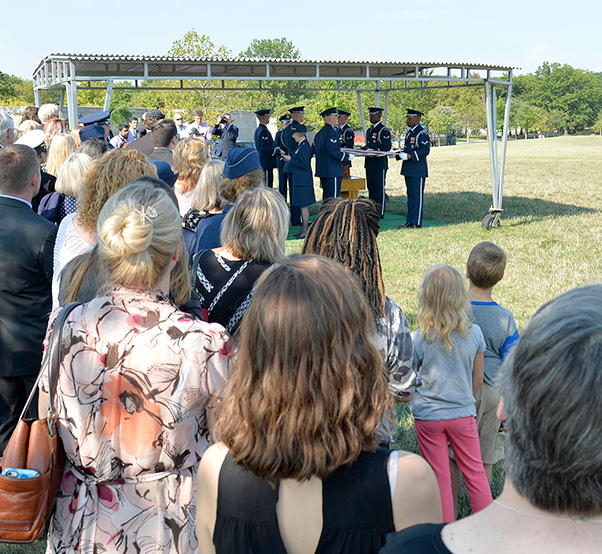 Family and friends pay their respects as 2nd Lt. Elaine Harmon, one of the original Women Airforce Service Pilots, is laid to rest at Arlington National Cemetery, Va., Sept. 7, 2016. Harmon died April 21, 2015, at the age of 95. 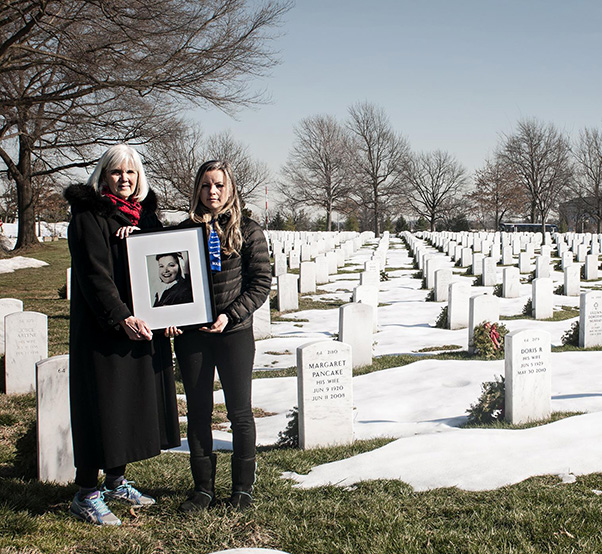