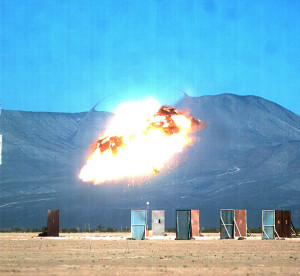 A Lockheed Martin GMLRS Alternative Warhead detonates at the target during a test flight at White Sands Missile Range, N.M.

The GMLRS Alternative Warhead was designed to engage the same target set and achieve the same area-effects requirement as the old MLRS submunition warheads, but without the lingering danger of unexploded ordnance.

Fully compliant with international treaties banning submunition weapons, the GMLRS Alternative Warhead rocket will allow all users of the MLRS to have an area-effects weapon in their inventories without the need to procure additional launcher systems. MLRS rockets with submunition warheads ended production approximately six years ago.

Lockheed Martin has produced more than 25,000 GMLRS rockets at its facility in Camden, which has received more than 60 awards over the last decade, including the 2012 Malcolm Baldrige National Quality Award and the Shingo Silver Medallion Award for Operation Excellence.