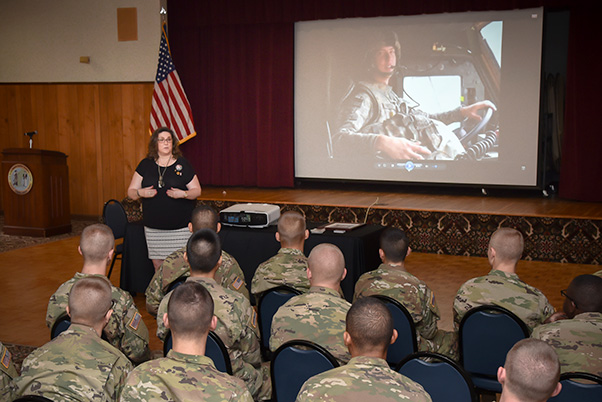 John and Lynn Patton, parents of Sgt. Matthew Patton, started a foundation in their son’s name in 2013 to talk about the importance of suicide prevention.

“It’s been very difficult on us,” Patton told the group of young Soldiers, “but this is what’s helping us survive, is to talk to you.”

In May 2013, with only six months left before he was due to complete his military service, Matthew died by suicide. He was only 23 years old. Patton admitted that, after her son’s death, it was tough for her even to be around other Soldiers, because they would remind her of her son.

“But now I love being around all of you because you remind me of him and I feel like his presence is here,” she said.

“Pieces of me are gone that I can’t even describe to you … Whole body parts are gone, not just my heart. It’s been three years, and I miss him.”

After Matthew’s death, Patton believed it was important that she speak to the Soldiers in Matthew’s unit. She recalled telling the brigade commander, “I would really love to talk to your Soldiers because I want them to know that they are important as Soldiers, but they are more valuable as human beings.”

Turning toward the group of Soldiers in the room, Patton continued, “You’re friends, you’re moms, you’re dads, you’re fellow Soldiers. You are so important just as people, and you have to remember that. You have to watch out for each other.”

Patton, a registered nurse, also discussed the stigma associated with the issue of suicide. She told the Soldiers, “If someone says ‘Don’t go to behavioral health because they will think you’re crazy,’ they’re wrong, and they are part of the problem.”

Patton urged the Soldiers to seek assistance if they are ever in need.

“You’re not weak,” she said. “You’re strong if you decide to go for help, and it works.”

In addition to Patton, Dr. Barry Feldman, the director of Psychiatry Programs in Public Safety and assistant professor of Psychiatry at the University of Massachusetts Medical School, also spoke at NSSC to conclude National Suicide Prevention Awareness Month.

“Suicide is a topic that a lot of people are uncomfortable with and can invoke a lot of anxiety,” said Feldman. “The myth is that we shouldn’t ask people about suicide.” 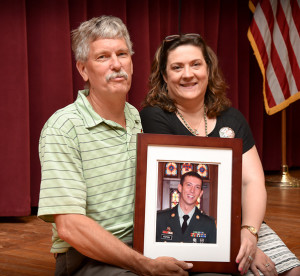 Feldman said this myth is false.

“Research shows that the ability to get people talking about their thoughts of suicide or their struggle can actually help to reduce suicidal behavior,” Feldman said.

Feldman said the national conversation about suicide must continue.

“If we had an identifiable medical condition that was taking a toll on our society like that, there would be significantly more effort and emphasis to try to eradicate that problem,” he said.

To learn more about Matthew’s story and the Matthew Patton Foundation, visit www.matthewpattonfoundation.org. If you or someone you know is feeling hopeless or having thoughts of suicide, call the National Suicide Prevention Lifeline at 1-800-273-TALK (8255), to be connected to a trained counselor at a suicide crisis center nearest you. Service members and veterans should choose Option 1.