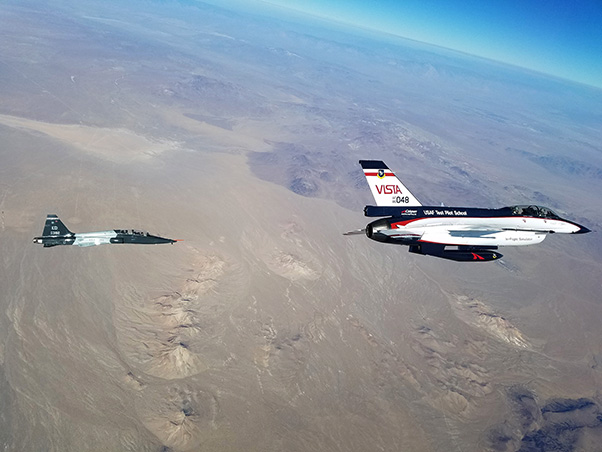 Early aircraft controls were manual, responding to the pilot’s inputs.

If a control surface got damaged, or a control system froze for some reason, the pilot was often unable to recover control of the aircraft. Frequently this resulted in loss of an aircraft and sometimes loss of life.

Fast forward to the modern era, and most aircraft are fly-by-wire. This means the pilot still controls the aircraft with physical input on traditional style controls, but now the aircraft’s computers interpret the pilot’s inputs. The computer knows what the aircraft is supposed to do when the pilot gives certain commands, and it moves the control surfaces to make the aircraft behave accordingly.

But still the problem of damaged surfaces or frozen systems poses a threat to pilots and aircraft.

Test Pilot School Class 16a has taken the task of testing an adaptive control system designed by a team from the University of Illinois, Urbana Champaign.

According to the test team, the L1 Adaptive Control System learns the standard flight parameters of the aircraft it’s installed on, and if anything changes, such as damage or mechanical failure of a flight control, the system can adapt the other flight controls to compensate.

‘L1 adaptive is a somewhat novel idea in that it doesn’t have to know what the airplane is like that you’re putting it on,” Cotting said. “You give it some basic information about the airplane and the adaptive controller should be able to configure itself to make the aircraft fly.”

The Adaptive Control System is a further evolution of the fly-by-wire systems that are becoming commonplace in modern aircraft.

Cotting said there were advantages to flight testing with this system.

“If I was going to put this on a production airplane, I wouldn’t have to do as many wind tunnel tests,” he said. “Or, if I know the wind tunnel doesn’t give accurate results, then I can use the adaptive controller to take out some of the uncertainly.”

Edelstein explained another advantage from a pilot’s perspective.

“If I am an F-16 pilot, I expect with a certain amount of force on the stick I am going to get a certain amount of aircraft response. This adaptive controller can say, ‘I know what an F-16 is supposed to fly like,’ so if some [anti-aircraft fire] hits my right aileron, this controller can adapt. It knows I don’t have this surface anymore, so it uses all the other surfaces on the aircraft to make that response exactly what the pilot would have expected all along, just like there’s no damage to the aircraft. But If you have a damaged aircraft, you don’t necessarily want a perfect aircraft, you want something that can get you home safely and land.”

Porter added to this thought; “The point is, this is not supposed to replace flight control systems in an aircraft. What it’s supposed to be for is more as a backup in an emergency —  ‘get me home so I can land safely.’”

Langevin cited an example of how this controller could have saved lives. In 1985, Japan Airlines Flight 123 crashed after losing a large portion of the tail and losing hydraulic controls to the entire plane.

“The pilots were not able to recover,” Langevin said. “Maybe, in that case, such a controller would have allowed the pilots to land safely.”
Fifteen crew members and 505 of the 509 passengers died as a result.

Editor’s note: This article is part one of a series about the L1 Adaptive Control System.