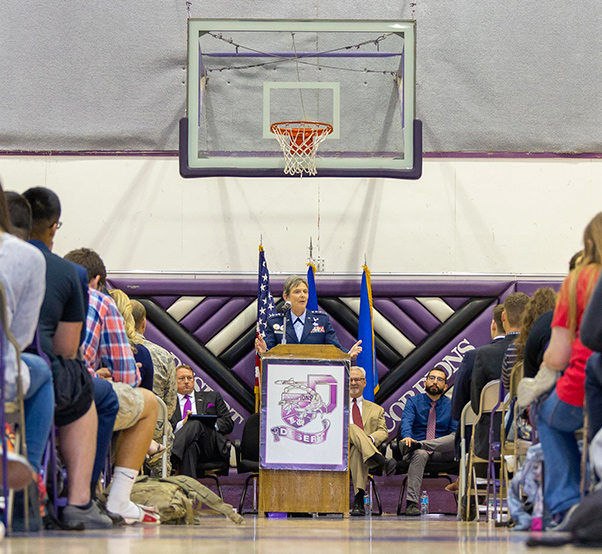 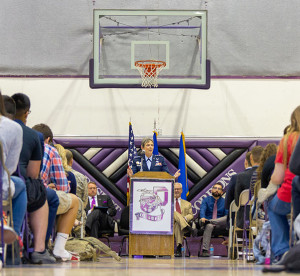 During her trip to the area Oct. 11, 2016, Gen. Ellen M. Pawlikowski, Air Force Materiel Command commander, participated in a number of activities marking the start of the Desert Junior Senior High School ‘s National Math and Science Initiative program. Pawlikowski attended an NMSI luncheon, met with STEM students and teachers, and also delivered a keynote speech at the school.

Gen. Ellen Pawlikowski, commander of Air Force Materiel Command, attended the event and talked to the students about the importance of taking math and science courses in school and how her education in those subjects has helped her throughout her career.

DHS joins a network of more than 1,000 schools nationwide that have adopted the program, which according to NMSI, is dramatically increasing the number of students succeeding in rigorous advanced placement coursework in math, science and English and is transforming schools into centers of college readiness. The program’s elements include extensive teacher training, extra time on task for students during Saturday study sessions, exam fees, classroom equipment, supplies and awards for achievement.

Marcus Lingenfelter, NMSI state and federal programs senior vice president, says NMSI’s military initiative was launched in 2010 in recognition of the need to improve educational opportunities for students of military families. NMSI receives money from the DOD to supply to schools in need and has expanded from four military-connected schools in 2010 to 160 schools across 29 states this year.

NMSI is a nonprofit organization dedicated to transforming math and science education in DOD school classrooms with proven, effective programs that can be replicated nationwide, Lingenfelter said. The program boosts advanced placement performance in partner schools by 10 times the national average and builds teacher capacity to advance student achievement at all levels, he said.