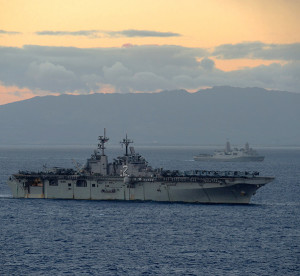 The Wasp-class amphibious assault ship USS Essex (LHD 2) and the San Antonio-class amphibious transport dock ship USS Anchorage (LPD 23) steam alongside off the coast of Hawaii. Essex is the flagship of the Essex Amphibious Ready Group and, with the embarked 15th Marine Expeditionary Unit (15th MEU), is currently operating in the U.S. 3rd Fleet area of operations.

Scheduled to be completed in March 2017, Essex will be the third big-deck platform to institute the upgrades and will be the first to do a set of work-ups and deploy with them.

The F-35B is the world’s first supersonic short take-off, vertical landing (STOVL) fighter and will become the new standard across the amphibious fleet. A Marine Corps aircraft, the JSF will be the next big step in Navy/Marine Corps integration.

Developmental testing on the JSF upgrades began Oct. 3, 2011, aboard USS Wasp (LHD 1) and continued supplemental testing aboard USS America (LHA 6). The upgrades will allow Essex to bring new capabilities to combatant commanders and enhance the limited ability to a critical capability while forward deployed.

“I think the main idea here is that this allows the amphibious force to remain relevant with this new technology being implemented,” said Hawthorne. “It is a key piece to becoming the preeminent maritime force.”

The F-35B is one of three Joint Strike Fighter variants. The “B” was designed for use by the U.S. Marine Corps and is capable of short take-offs and vertical landings for use on amphibious ships or expeditionary airfields to provide air power to the Marine Air-Ground Task Force. The F-35B will replace the AV-8B Harrier and will continue test and evaluation at Naval Air Station Patuxent River prior to delivery to the fleet.

Essex is currently conducting a Planned Maintenance Availability at Naval Base San Diego to upgrade and modernize the ship and its systems.