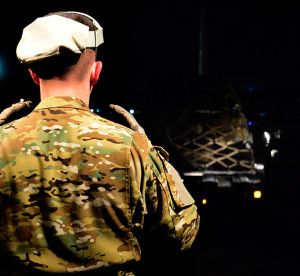 The aircraft landed mere hours after repairs to the runway were completed, a project that’s been underway since Iraqi security forces retook the airfield from Da’esh in July of this year.

“It’s taken several months to plan this mission,” said Lt. Col. John Poole, 386th Expeditionary Operations Support Squadron commander. “A big part of it was since before the airfield was taken, we knew that it had been damaged significantly by [Da’esh] as they were either holding the field or then evacuating the area as the Iraqi security forces liberated the field. It’s taken several months to repair that damage.”

The airfield, known colloquially as Q-West, serves as a staging hub for forces fighting to liberate Mosul from Da’esh. Its degraded state has made supplying front line fighters difficult, but Friday’s successful mission has helped ensure the base is ready for more robust operations.

The C-130s were carrying firefighters and their equipment into the airfield in order to establish a fire rescue capability there for future flights. They also brought along ammunition, both for defense of the airfield itself and for ground troops moving into Mosul.

Being the first aircraft to fly into a newly renovated airfield under cover of darkness presented a particularly difficult challenge, said Maj. Jeff Noble, 737th EAS instructor pilot and the aircraft commander for the flight.

“When there is no other lighting around, it can be very difficult to see other features, so you have to trust in your planning in order to make sure that the mission is successful,” he said. “Sometimes it can be just landing in a black hole with four little lights, which is what we had the other night.” 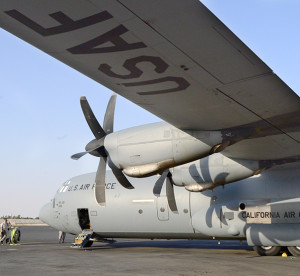 A C-130J Super Hercules assigned to the 737th Expeditionary Airlift Squadron sits on the ramp at an undisclosed location in Southwest Asia prior to a mission to Qayyarrah West Airfield, Iraq, Oct. 21, 2016. The 737th EAS flew the first coalition mission into the airfield since the start of Operation Inherent Resolve.

Despite the challenges, Noble and his crew felt confident about the flight due to all the support they received from the rest of the squadron.
“That’s why we’re able to do what we do,” he explained. “Go out and execute the mission, because we’re well prepared and well taken care of.”

Moving forward, Q-West will continue to play a significant role in supplying the fight in Mosul and beyond.

“This brings us one step closer to wiping Da’esh off the face of the map,” said Poole. “This will help us support our Iraqi security forces and our partners in the coalition into liberating the city of Mosul and handing over a free city back to the people of Iraq.”