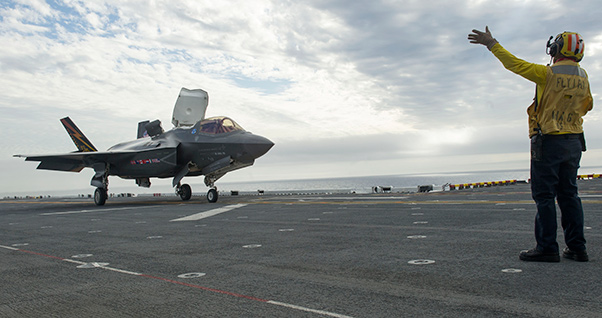 An F-35B Lightning II aircraft launches for the first time off the flight deck of the amphibious assault ship USS America (LHA 6). The F-35B short takeoff/vertical landing (STOVL) variant is the world’s first supersonic STOVL stealth aircraft. America, with Marine Operational Test and Evaluation Squadron 1 (VMX-1) and Air Test and Evaluation Squadron 23 (VX-23) embarked, is underway conducting the first phase of developmental testing for the F-35B Lightning II aircraft, which will evaluate the full spectrum of joint strike fighter measures of suitability and effectiveness in an at-sea environment.

America, the first ship of its class, is an aviation-centric platform that incorporates key design elements to accommodate the fifth-generation fighter.

The ship’s design features several aviation capabilities enhanced beyond previous amphibious assault ships which include an enlarged hangar deck, realignment and expansion of the aviation maintenance facilities, a significant increase in available stowage of parts and equipment, as well as increased aviation fuel capacity.

America is capable of accommodating F-35Bs, MV-22B Osprey tiltrotor aircraft, and a complement of Navy and Marine Corps helicopters.

“It’s exciting to start the execution phase of our detachment with VMX-1 (Marine Operational Test and Evaluation Squadron 1) on USS America,” said Lt. Col. Tom “Sally” Fields, F-35 Patuxent River ITF Government Flight Test director assigned to VX-23. “During the next three weeks, we will be completing critical flight test for both Developmental Test (DT) and Operational Test (OT). The F-35 Pax River ITF and VX-23 will be conducting DT work that will establish the boundaries of safe operation for the F-35B in the 3F configuration. VMX-1 will be conducting OT operations focused on preparing maintenance crews and pilots for the first deployment of the F-35B aboard USS Wasp (LHD 1), scheduled to start in just over a year.”

Rowell stated one of the VMX jets on board will be placed in the hangar bay, taken apart, and put together again, just to make sure everything goes well. 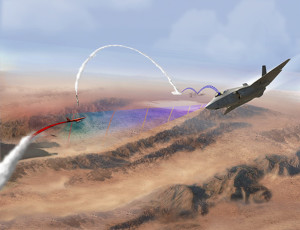 The maintenance work will include the replacement of a lift fan, the specialized equipment made by Rolls Royce and Pratt and Whitney that gives the F-35B variant its short take-off, “jump jet” capability, Rowell said.

“The F-35 Lightning II is the most versatile, agile, and technologically-advanced aircraft in the skies today, enabling our Corps to be the nation’s force in readiness — regardless of the threat, and regardless of the location of the battle,” said Lt. Gen. Jon Davis, deputy commandant for aviation, Marine Corps. “As we modernize our fixed-wing aviation assets for the future, the continued development and fielding of the short take-off and vertical landing, the F-35B remains the centerpiece of this effort.”

“The America class of amphibious assault ship design enables it to carry a larger and more diverse complement of aircraft, including the tiltrotor MV-22 Osprey, the new F-35 Lightning II, and a mix of cargo and assault helicopters,” added Davis. “America is able to support a wide spectrum of military operations and missions, including putting Marines ashore for combat operations, launching air strikes, keeping sea lanes free and open for the movement of global commerce, and delivering humanitarian aid following a natural disaster.”