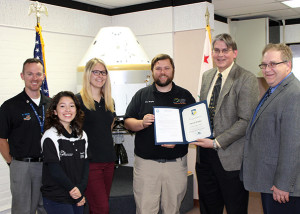 The Air Force Research Laboratory Rocket Propulsion Division at Edwards Air Force Base, Calif., is launching a new program to promote science, technology, engineering and mathematics classes and announces the first six projects started in local high schools this year in that effort.

The AFRL Rocket Lab is calling its new program ENSPIRE, which stands Engineering & Science Producing Inspirational Rewarding Education. The program seeks to inspire innovation in students to become more involved in STEM efforts by seeking unique and innovative STEM projects that develop the next generation of STEM activities in schools to take the program to a new level in the Antelope Valley, organizers say.

Schools were required to submit their proposals to the Rocket Lab explaining how they would improve STEM in their classroom, their school, or across the district. These proposals included a short write-up and a budget for the year-long project.

“The goal of AFRL Rocket Lab STEM is to inspire kids all across the Antelope Valley to become the next generation of scientists and engineers, not just for the Air Force but all the industries across the United States,” Vander Hyde said.

Tehachapi Unified School District proposed a project to build “Mobile Maker Carts” that can be used by the high school robotics team to get junior high and elementary students interested in the school STEM program. These carts will be used by the students of the Tehachapi Robotics Team in their Peer Teaching Program to teach engineering and programming in other schools.

Rosamond and AV High Schools both proposed using drones in unique ways. Rosamond is using drones to reach out to their STEM students and do a program where student teams will build their own unmanned aerial vehicle. AV High School proposed to use drones and infrared sensors in precision agriculture to monitor crop growth and watering efficiency.

Robots were the main theme in Boron, Hesperia and The Palmdale Aerospace Academy projects. Boron Junior-Senior High School is using robots to teach engineering and critical problem solving, while Hesperia High School is expanding its robotics team and including significantly more students in its program.

The Palmdale Aerospace Academy’s idea is to build a simulator that will demonstrate impaired driving by having students drive robots around a miniature town. The course, robots and software will all be designed and built by academy students who will then be able to measure perception and reaction times of the students using the simulator.

By extending the frontier of STEM education in the Antelope Valley, AFRL is looking for new engineers and scientists to grasp the cutting-edge technologies that the United States will need in the future to maintain the nation’s influence in the world, organizers say.

Dr. Richard Cohn, chief engineer of the AFRL Rocket Lab, said, “Inspiring students to pursue STEM is critical for the future of our nation. Future advances in STEM are critical to solving the world’s problems and without an inspired, motivated group of young people entering the field, we will surely be left behind. These programs provide a phenomenal opportunity for the young people of the Antelope Valley to become inspired to lead the charge.”

The Air Force recognizes there is a critical need for STEM talent for future technology and innovation efforts within the nation’s STEM workforce, organizers say. A diversified STEM talent pool will establish the pace of technological advancements and enable the Air Force to avoid surprises. A transformational STEM workforce will also direct the path of technological dominance and sustain a combat edge for the armed services.