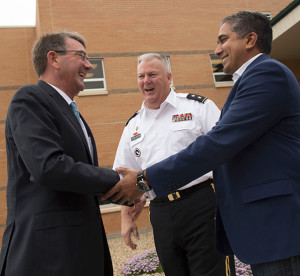 The Pentagon’s Defense Innovation Unit-Experimental technology outposts will expand beyond their offices in three states by calling on innovators and tech experts in the National Guard and reserve to expand the DIUx presence nationwide, DIUx Managing Director Raj Shah said in Washington, D.C., Nov. 16.

The entrepreneur, Air Force reservist and former fighter pilot addressed an audience during CyberCon 2016, hosted by C4ISRNET, Defense News and Federal Times, discussing progress and lessons learned by the new team at DIUx 2.0, the second iteration of the innovation hubs that Defense Secretary Ash Carter announced in May.

From its beginning DIUx was meant to connect with technology innovation companies that might not see the Defense Department as a customer for their products, Shah said, and help them find military customers and navigate through the Pentagon.

Accelerating technology, Innovation
Beyond that, Shah said the new team has learned some things over the past six months and from their predecessors that helped them “accelerate technology and innovation from the commercial sector to help our warfighters, our men and women in uniform.”

One is relationships, he said, or having a team whose members are from the innovation community and understand the challenges a non-traditional company or vendor has in working with the government.

Second is having the resources and authorities to move at the speed of business with those companies, and third is to focus on problem sets rather than requirements, particularly for software and more novel solutions.

“The non-traditionals or younger companies are not appropriate to help us build the next aircraft carrier,” the director added, “but for certain types of software, particularly in cybersecurity, you come with a capability gap rather than a list of requirements [and] we can work with them.”

A nationwide effort
Innovation isn’t limited to California’s Silicon Valley, Boston, or Austin, Texas, where three DIUx offices have opened since 2015, Shah explained.
“It’s a nationwide effort,” he added, noting that DIUx has had applications from tech companies in 32 states.

Because DIUx can’t have offices everywhere, Shah said they’re addressing the challenge using “key untapped resources we have as a nation and a department,” National Guard and reserve forces.

“We have reservists working in technology companies of all sizes [and] maturities across the nation and they have a deep desire to continue to serve. What better way than to be able to have them serve with us in the department in the capacity that’s similar to their day job,” Shah said.

If a reservist runs a security operations center in a Fortune 50 company in the Midwest, he said, “rather than him driving a tank on the weekend, why not have him come and do security with us? That’s our approach to try to expand across the nation,” he added.

“We’re setting up a new reserve unit across the services, including the National Guard, where we will be able to help build the team that gives us access to new technology,” Shah said.

“They’ll live where they live, they will work where they work, and we will use them as required,” he said, noting that the DIUx Austin presence, opened earlier this year, is the first instance of “a nexus of reservists and we hope to have more of those across the country as we grow.”

“There are five key technology areas that we at DIUx are focused on, ones that we think the commercial sector — because of their own investment and their own focus on going after the $25 trillion consumer market — are putting in tons of investment dollars that we can benefit from,” he added.

“I think you’ll see that our next few projects will be mapped across those areas and we’re continuing to move forward and constantly working with our partners,” Shah said.

DIUx is not alone in reaching out to non-traditional innovation companies, he added, and “if a company views the department as a transparent and reliable customer and partner they’ll want to work with us.”

Shah said the department’s problem sets “are so exciting that engineers want to come in and work on them. The things we do are far more interesting than working on a photo-sharing app,” Shah said, “but it has to make business sense.”

He added, “If you want to solve a problem but it takes you 24 months to get a contract, you’re going to go build a photo-sharing app. That’s what I think is changing and in fact I think … we’ll see more and more interesting companies wanting to work with us.”