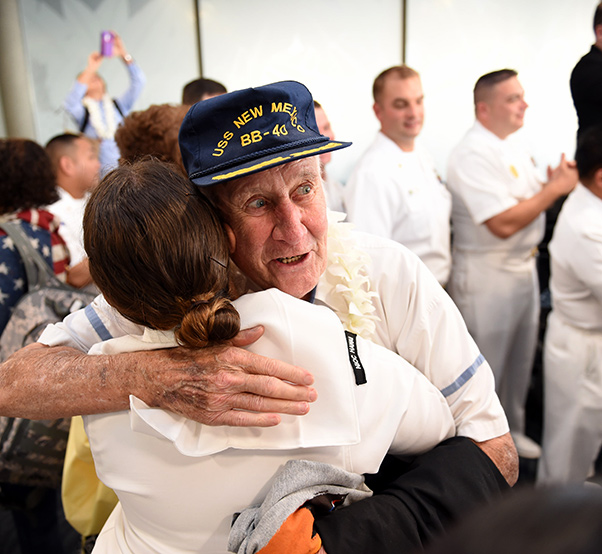 Petty Officer 3rd Class Lauren Charping, of Charlotte, N.C., assigned to Navy Information Operation Command (NIOC), gets a hug from a World War II veteran arriving at Honolulu International Airport. More than 100 World War II veterans, including Pearl Harbor survivors, arrived in Honolulu to participate in the remembrance events throughout the week to honor the courage and sacrifices of those who served during Dec. 7, 1941, and throughout the Pacific Theater. Dec. 7, 2016, marks the 75th anniversary of the attacks on Pearl Harbor and Oahu. As a Pacific nation, the U.S. is committed to continue its responsibility of protecting the Pacific sea-lanes, advancing international ideals and relationships, well as delivering security, influence, and responsiveness in the region.

Past and present met Dec. 3 when Sailors from Joint Base Pearl Harbor Hickam greeted more than 100 World War II veterans, including Pearl Harbor survivors, when they arrived at the Honolulu International Airport for the upcoming 75th Pearl Harbor commemoration events throughout the island of Oahu.

Two lines formed on either side of gate 18 and stretched across the concourse. Sailors headed the line, with civilians, Airmen, Coast Guardsmen and Marines standing by with leis to welcome the veterans back to the island. Among those Sailors, was Petty Officer 2nd Class Talisha Williams, from Fresno, Calif.

Williams, a quartermaster assigned to Joint Base Pearl Harbor Hickam, has been in the Navy for eight years and is in charge of the honors and ceremonial guard on base. This is her third Pearl Harbor anniversary and said she looks forward to seeing the veterans every year.

“I’m glad I’m here for the 75th anniversary because as the years go on, we are going to have less and less veterans that we will be able to talk to,” said Williams. “So, it’s nice we get to do this now.”

As veterans filed off the plane, clapping and cheers filled the concourse. The excitement lasted until the very last veteran deplaned. Williams made it a point to shake each one of their hands.

“Actually getting to meet people that were there that day and hear their stories, that is really inspiring to me,” said Williams. “That’s what makes me want to stay in the Navy. I think what I can take away from this is always have pride in what you do. They are the epitome of the Navy core values: honor, courage, and commitment. They are symbols, for me, of the kind of Sailor I want to be.” 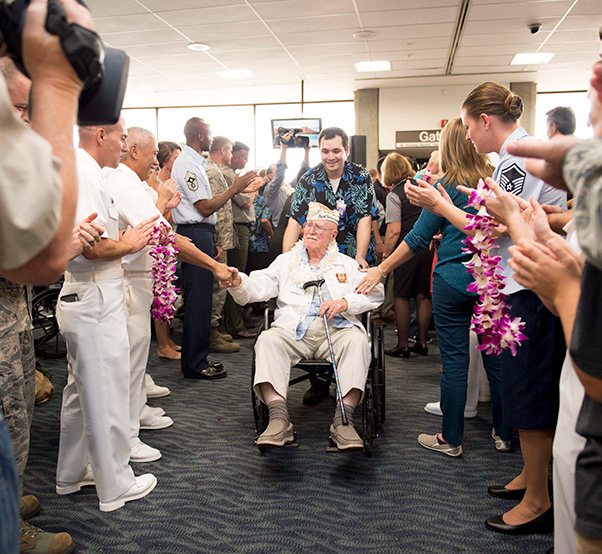 A Pearl Harbor survivor arriving at Honolulu International Airport is greeted by service members and Sailors assigned to various commands throughout Joint Base Pearl Harbor-Hickam.

This honor was shared among all the spectators at the airport today.

“It is so exciting and such an honor to be a part of it,” said Heather Bailey, the director of operations for MC & A, who prepared the Honor Flight reception. “It’s a momentous time in history. To have the opportunity to honor these people personally that were there on that fateful day. It really is just exciting to be here.” 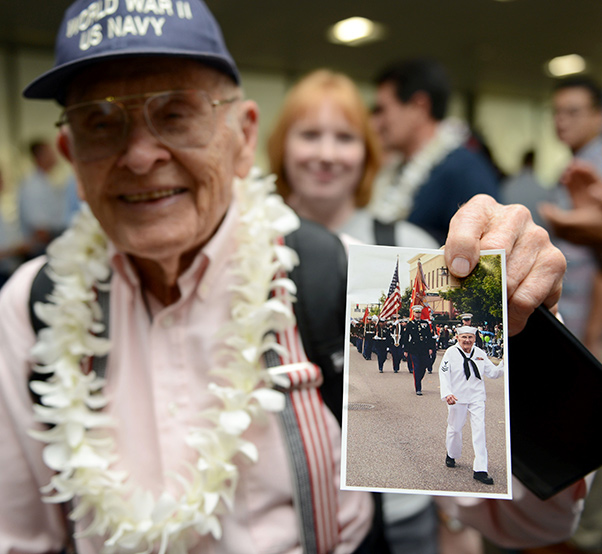 A U.S. Navy World War II veteran shows a photo of himself to several military members and personnel after the arrival of an American Airline honor flight from Los Angeles at the Honolulu International Airport.

“I didn’t expect how much it would move me to see them when they came out. They were so humble and so happy to see us,” she said. “They were absolutely surprised. It brought me to tears.”

American Airlines donated the charter plane that flew the veterans from Los Angeles to Honolulu. Also on the flight, were Gary Sinise and the Lt. Dan Band, who are scheduled to perform a special 75th commemoration concert on Dec. 5 on Waikiki Beach.

The World War II veterans will be participating in a number of events throughout the week honoring their service and also paying tribute to the inspiration they have provided today’s service. 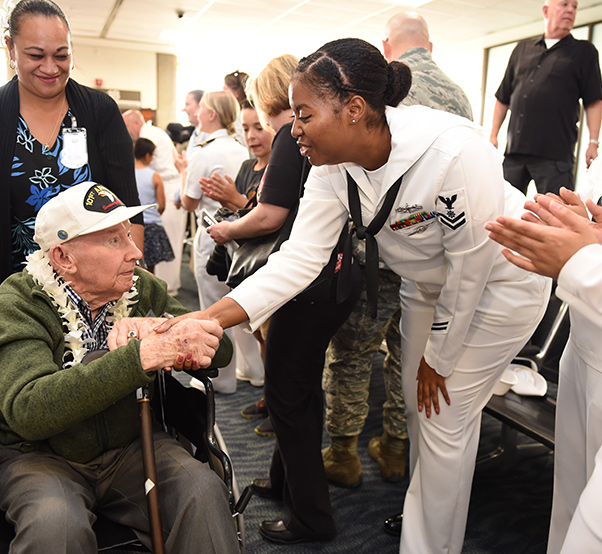 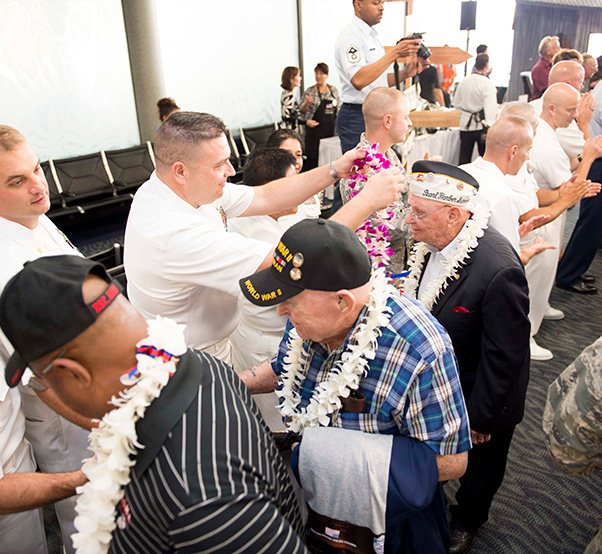