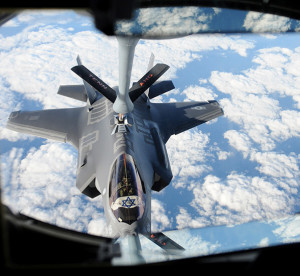 An Israeli F-35 “Adir” receives fuel from a Tennessee Air National Guard KC-135 as the aircraft make the flight across the Atlantic, Dec, 6, 2016. The U.S.-made F-35s will be Israel’s first fifth generation fighter aircraft and were refueled multiple times while en route to ensure their safe delivery to Israel.

The 618th AOC planned the mission and provided command and control for the KC-135s while they dispensed the fuel needed to ensure an effective multi-day mission to deliver the two new Israeli F-35 “Adirs”.

“We always need to be at the top of our game,” said Maj. John Hale, the aircraft commander for the Tennessee ANG KC-135. “That’s especially the case when enabling the delivery of Israel’s first fifth generation fighters with a 52-year-old aircraft.”

Even with the overall KC-135 fleet reaching 60 years old, the aircraft and its Airmen continue to provide refueling capabilities to nine combatant commanders worldwide. Every 2.8 minutes there is some type of AMC aircraft supporting an operation somewhere around the globe. Mobility forces work with international partners to enhance their defense capability and capacity to conduct missions.

The U.S. and Israel have a military relationship developed through decades of cooperation. The delivery of capable and effective fighter aircraft will bring new capabilities to Israel and deepen the ties between the two countries. 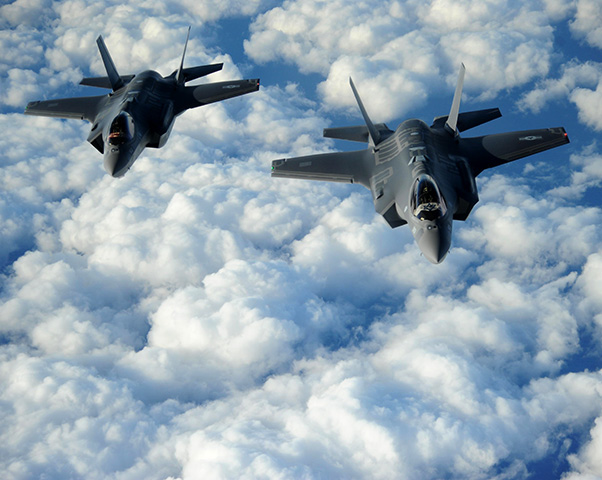 Two Israeli F-35 “Adirs” fly in formation, and display the U.S. and Israeli flags, after receiving fuel from a Tennessee Air National Guard KC-135, Dec, 6, 2016. The U.S. and Israel have a military relationship built on trust developed through decades of cooperation.

“It is an honor to help ensure the delivery of F-35s to a valued ally,” said Gen. Carlton Everhart, the Air Mobility Command commander. “Aerial refueling missions enable global reach for the United States and partner nations. Air Mobility Command Airmen and aircraft enable global effects and create bridges of support for partner nations on a daily basis.”

Sharing the same aircraft with partner nations allows the U.S. to fly and fight in the same airframe with common tactics, capabilities, and resources, ensuring an interoperable coalition.