When it comes to NASA X-planes, no amount of preparation, training or precaution is too great. These experimental aircraft, which have historically pushed the boundaries of aeronautics, feature exploratory designs and systems with which even the most experienced pilots have little actual practice.

For pilots to be as safe as possible in piloted X-plane flight demonstrations, that experience must be gained through practice — well before the actual aircraft is flyable.

Test pilots and engineers at NASA’s Armstrong Flight Research Center in Edwards, Calif., are “flying” a simulator designed to the innovative specifications of the X-57 Maxwell, which will be NASA’s first piloted X-plane in two decades. X-57 will be the first NASA X-plane to feature a fully distributed electric propulsion system, which researchers will use to demonstrate an increase in cruise energy efficiency, as well as reductions in carbon emission and aircraft noise.

The interactive simulator is designed specifically to prepare pilots for the X-57’s future flight testing phase.

Flight control engineers and technicians at Armstrong have designed the X-57 simulator to provide a virtual flight experience according to what the X-plane will actually feel like when it flies, which will be as early as 2018. This familiarizes the pilots and engineers with the system, making them more adept with reaction times and maneuvers, and helping the team develop emergency procedures.

Sean Clarke, principal investigator for the X-57, says collecting and analyzing data from the simulator is an effort and responsibility distributed throughout the entire X-57 team.

“Two of our test pilots have been flying it actively, and the controls group here at Armstrong is critical in getting the simulator working in this interactive way,” said Clarke. “The chief engineer, Matt Redifer, and I are down here regularly, looking at the performance and making sure that the fidelity is high enough that we’re getting good data from it.”

Since the X-57’s configuration will undergo several design transitions throughout the timeline of the project, the team will update the simulator according to the specifications of each phase. A later configuration of the X-plane will include the integration of a high-performance wing with motors out on the wingtips. Pilots will familiarize themselves with that configuration when the flight test phase of that modification approaches. 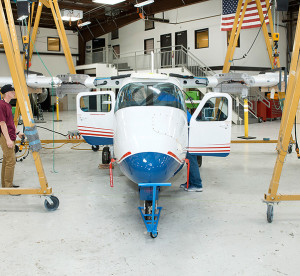 The Tecnam P2006T undergoes wing integration at Scaled Composites in Mojave, Calif., where the aircraft’s system will be converted to feature electric propulsion.

Among the simulations the team has designed into the program are multiple failure modes that are considered the most common for this aircraft architecture. As the test pilots are exposed to the programed failure modes, the X-57 team is able to evaluate the performance of the aircraft, as well as the reaction time that is required. This helps the team develop emergency procedures specific to the experimental aircraft.

By flying the simulator during the phases of the project in which the aircraft is still being integrated with an electric system, Clarke says the team gains the benefit of being ready to fly as soon as the aircraft is flight worthy.

“This is a critical activity, so that the pilots get experience with our experimental wing, and experimental motors before we actually put them on the airplane,” said Clarke. “That way, we are optimizing the time in the flight test phase of the project so that the aircraft is not tied up with the pilots learning the performance at that time.”

The aircraft itself, a baseline Tecnam P2006T, is currently undergoing conversion at Scaled Composites in Mojave, Calif. The aircraft’s two inboard engines are being modified to feature an electric system, and could undergo taxi tests in early 2018.