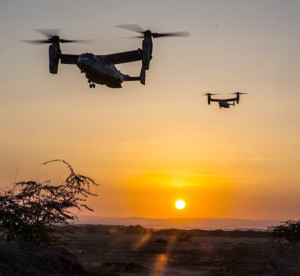 MV-22 Ospreys approach a landing zone during a training exercise conducted in Djibouti, Jan. 10, 2017. Ospreys have the ability to transport Marines and sailors quickly to the battlefield due to their ability to tilt their rotors horizontally and fly like an airplane. The Ospreys and crew are with Marine Medium Tiltrotor Squadron 163 (Reinforced), 11th Marine Expeditionary Unit.

The future of rotary-wing or vertical lift aircraft across the services is the focus of a Defense Department initiative that seeks to improve the speed, range, refueling and interoperability capabilities across the military services, U.S. Special Operations Command and the Coast Guard, and was the subject of a discussion today at the Center for Strategic and International Studies in Washington, D.C.

Designing a ‘family” of vertical lift systems
“We recognized, early on, that this was going to be … a family of capabilities,” Gonzalez said. The family might include multiple-role aircraft, joint aircraft and service-specific models, he added.

Critical to the effort, he said, is identifying the missions and capabilities each service needs, as well as cross-service uses for vertical lift.

The Army, Marine Corps, and Socom are “driving and leading an analysis of alternatives,” Gonzalez added.

While the United States has world-class vertical lift capabilities today, many of the aircraft in the inventory have reached their performance and design limits, he said.

“Life-cycle costs have become unsustainable,” Gonzalez said. “And we’re too slow, and it’s too expensive to upgrade those systems.”

The message Gonzalez said he wants to deliver is: “In vertical lift, in this community, we’re lucky if we get a chance every 50 years to do this, to upgrade the capability.”

Most of the rotary-wing aircraft now in use date back to 1970s design, he noted, so the ongoing “future family” effort is a case of needing to “do it and get it right.”

That comes down to four factors, he said: a deliberate, disciplined, patient and collaborative approach.
“We could rush, but we’re not going to rush,” Gonzalez said. “ … We’re going to get one shot at doing this and we want to get it right.”

Risks, opportunities
Gonzalez said changing threats and priorities, along with available resources, will affect plans as the project advances.

“The opportunities are in using vertical lift to do things that we haven’t even really thought about doing with them,” he said. “The opportunity there is, as we do this analysis, is to see what is the art of the possible. How can we use these aircraft in new and novel ways?”

Clardy said of the many large programs he’s involved with across the services, “I don’t see any that are structured the way this one is. … I’m very impressed by the people who are involved directly, whether it be industry, within the Joint Staff, certainly within [the office of the Secretary of Defense], and their interest in making this successful.”

One challenge, Clardy said, is to sustain effort and energy in pursuing the future family of vertical lift systems.

“I see a lot of stick-to-it-iveness with this [project.],” he said. “ … We will have challenges and … friction. We just have to be willing to overcome that friction.”