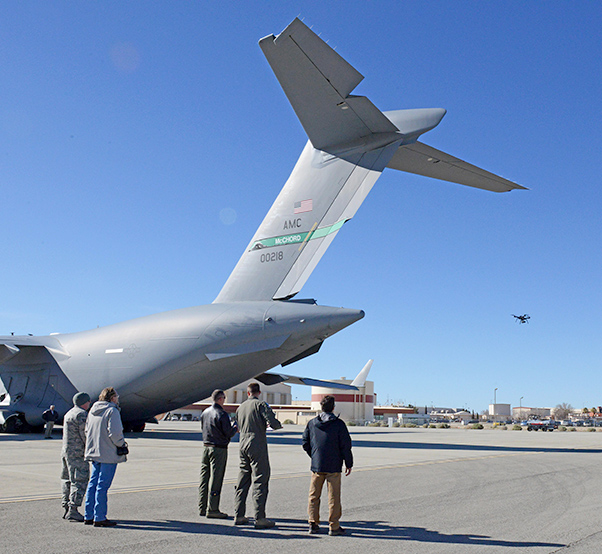 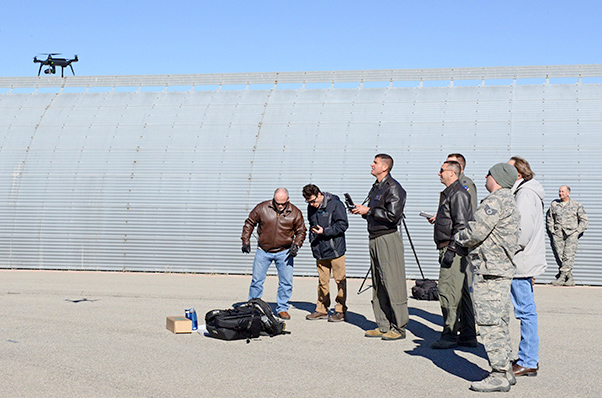 When the 412th Test Wing’s Emerging Technologies Combined Test Force used a quadcopter to conduct a maintenance inspection of the exterior of a C-17 Globemaster III March 6, it marked the second time the CTF used a small unmanned aerial system in a new application that shows promise.

The test involved flying the quadcopter at various distances from the C-17, which is on loan to Edwards Air Force Base, Calif., for upgrades and testing from the 62nd Airlift Wing at Joint Base Lewis-McChord, Wash.

This was the first time the ET CTF flew an sUAS on the flightline. Winds remained manageable and allowed the test team to conduct three sorties with the quadcopter, which was fitted with a video camera.

Live video was assessed by the team, including maintainers, to determine if the quality was adequate for routine inspections. In addition, video recorded from the quadcopter’s camera will be analyzed to see if it is clear enough to see smaller details of the cargo plane’s exterior such as structural abnormalities, rivets and cracks. According to Maj. Dan Riley, ET CTF director, the test was so successful that the maintainers used the data to sign off their preflight external inspection, a first for the Air Force.

“This could save [maintainers] a lot of time,” said Staff Sgt. Joshua Jaburek, 62nd Aircraft Maintenance Squadron at Lewis-McChord. “When we go on top of the airplane, we can only walk on certain parts and then we have to hook and unhook our (safety harness) every few feet.” 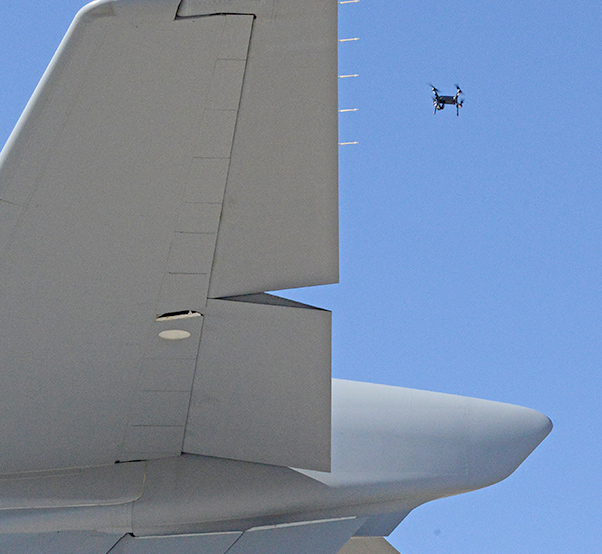 The Emerging Technologies Combined Test Force conducts a test to see if a quadcopter with video camera can be used to conduct exterior maintenance inspections on a C-17 Globemaster III March 6, 2017.

Jaburek said inspections that would normally take 45 minutes to an hour could be done just in a few minutes with a quadcopter if it’s successful. Maintainers also would not need a lift to inspect a C-17’s tail.

According to Capt. Justin Merrick, ET CTF lead engineer, the CTF got the idea from seeing a video online showing a commercial airline company using an sUAS to inspect a plane.

“[Leadership] encourages us to go out and conduct tests, so after we saw some videos online we contacted some maintainers here and they were very enthusiastic to help out,” said Merrick.

Riley added that this first test on the flightline could pave the way for future sUAS tests and test procedures. 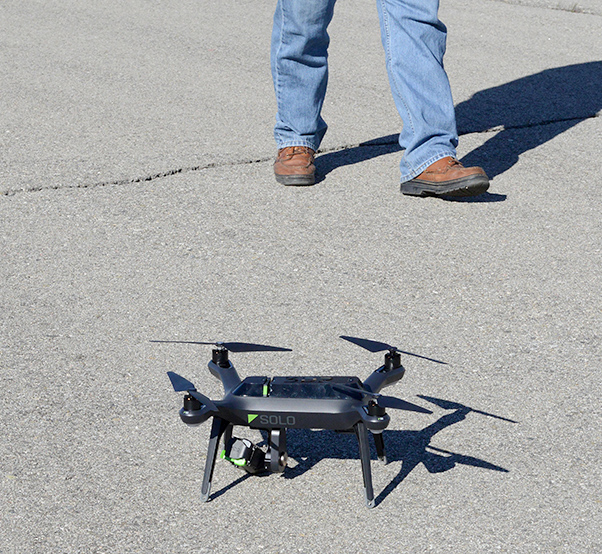 The quadcopter used for the test is available on the civilian market and is a relatively inexpensive test article according to Emerging Technologies Combined Test Force personnel.

“Another reason we’ve conducted this test is to open the aperture on flying an sUAS near the airfield, which has been frowned upon in the past,” said Riley. “As we execute these missions it establishes a baseline for how operations can be conducted safely, not only here at Edwards, but at other bases as well. We couldn’t have accomplished what we have so far without the support of the 412th Operations Group and test wing commander in breaking down some of the barriers to these types of operations.”

Riley said the CTF is looking at a variety of other missions in the near future such as roof inspections, airfield inspections and environmental-concern area inspections.

In February, the newly formed ET CTF began testing a quadcopter to determine if it was possible to use the sUAS to calibrate the 412th Range Squadron’s telemetry antennas on base. Those tests also yielded positive results.

The Emerging Technologies CTF was officially activated last July and its mission is to provide agile, innovative flight test capabilities for emerging technologies and to explore the Air Force warfighting capabilities of tomorrow. Current focuses are on the use of small unmanned aerial systems for testing and operational use, and on autonomous systems’ development and use.

The 412th Test Wing’s Emerging Technologies Combined Test Force conducted a test with a quadcopter to see how well it can conduct a maintenance inspection of the exterior of a C-17 Globemaster III March 6, 2017.