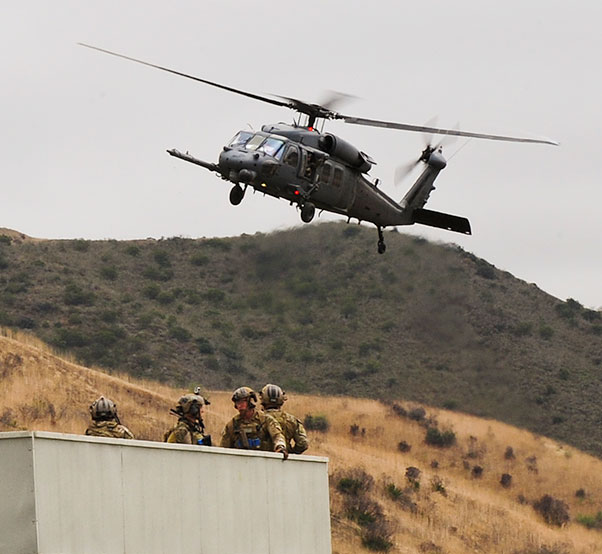 A U.S. Air Force HH-60G Pave Hawk prepares to land during a mass casualty exercise apart of Angel Thunder 2015 at a training site outside of Marine Corps Base Camp Pendleton, Calif., June 11, 2015. The objective of the exercise was to clear the area of opposing forces and stablilze and safely extricate simulated casualties.

The Air Force is doing a reset on a large training exercise during which helicopter crews and other personnel use parts of Arizona and neighboring states to practice rescues and extractions of downed aviators and other service members.

Air Force officers said the decade-old Angel Thunder exercise run from Davis-Monthan Air Force Base in Tucson, Ariz., is increasing in frequency to twice annually while being reduced to about one-third of the size of previous exercises.

Angel Thunder exercises this year are scheduled for May and November. The last exercise was held in 2015.

Lt. Col. Christopher Cunningham said the exercise has gradually increased in size and scope since the first one in 2006 and that changes now being implemented will focus it more on the Air Force’s training needs.

Cunningham commands a Davis-Monthan detachment of the 414th Training Squadron stationed at Nellis Air Force Base near Las Vegas.

Capt. Sarah Greco, a spokeswoman for the 57th Wing at Nellis, said about 30 aircraft and between 900 and 1,000 personnel will participate in the revamped exercise.

The three-week exercise will use established airfields and helicopter landing pads, many on military bases, but also unimproved sites for helicopter landings and drop zones for parachutists. Some possible training sites are located in national forests, ranches and recreation areas. 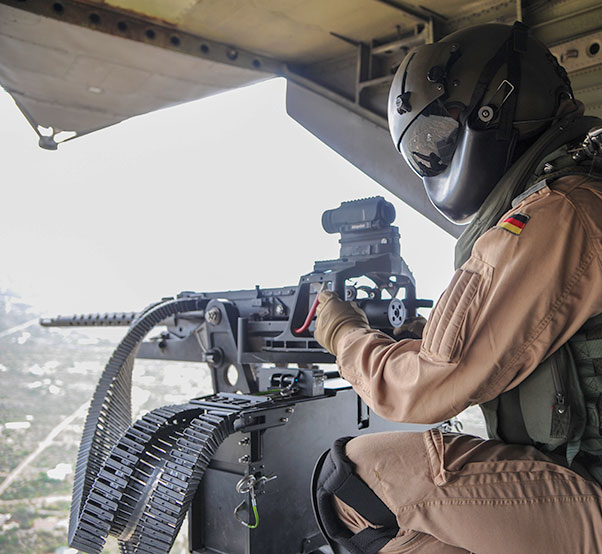 Camp Navajo, an Arizona National Guard installation at Bellemont near Flagstaff in northern Arizona will continue to be used as a forward operating base, according to the assessment.

Participating aircraft would include rescue helicopters, cargo planes, attack jets, tankers and drones, with most of the projected 800 flights being flown from Davis-Monthan.

Davis-Monthan is home to an Air Force rescue unit, and Cunningham said the Angel Thunder is similar to normal training conducted at the base but that having additional units participate helps make training more realistic and relevant. 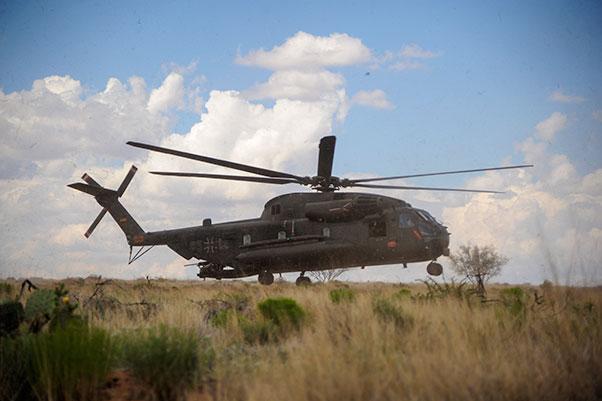 A German Air Force CH-53GS lands in southern Arizona during Angel Thunder 2015, June 9, 2015. The objective of Angel Thunder is to train personnel recovery forces to prepare, plan, execute and adapt for a rescue mission.

The exercise will continue to be centered on Davis-Monthan but other locations will be used depending on training objectives that are set annually, Cunningham said.

Most of the exercises focuses on aircraft but some ground personnel are needed, for instance if a team must be sent on foot to reach a person at a location where aircraft can’t be used for an extraction, Cunningham said. “So there’s a balance of air and ground training.”

The additional participants can include other Air Force units as well as units from other U.S. military services and foreign countries. 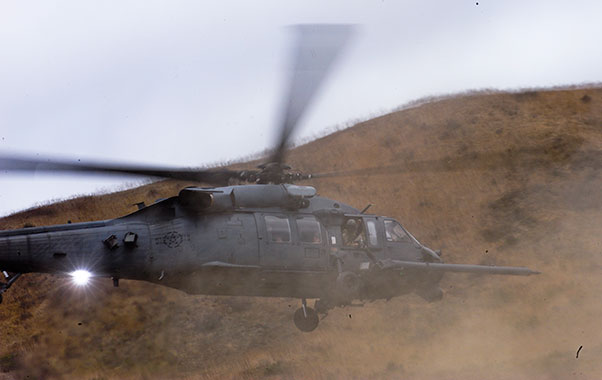 A U.S. Air Force HH-60G Pave Hawk takes off carrying simulated casualties during a mass casualty exercise apart of Angel Thunder 2015 at a training site outside of Marine Corps Base Camp Pendleton, Calif., June 11, 2015. The objective of the exercise was to clear the area of opposing forces and stablilze and safely extricate simulated casualties.