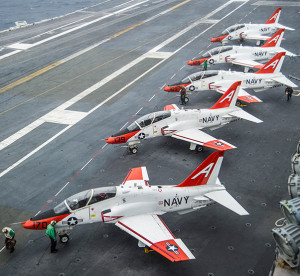 Pilots perform pre-flight procedures in T-45C Goshawks from Training Air Wing One (TRAWING) 1 on the flight deck of the aircraft carrier USS George Washington (CVN 73). George Washington, homeported in Norfolk, is underway in the Atlantic Ocean.

The pause is in response to concerns raised by T-45C pilots over the potential for physiological episodes. It will also allow time for Naval Aviation leadership to engage with the pilots, hear their concerns and discuss the risk mitigation efforts that are ongoing to correct this issue. Flight operations are expected to resume on Monday.

March 31, 94 flights were cancelled between Naval Air Stations Kingsville, Meridian and Pensacola due to operational risk management (ORM) concerns raised by T-45C instructor pilots. Their concerns are over recent physiological episodes experienced in the cockpit that were caused by contamination of the aircraft’s Onboard Oxygen Generation System (OBOGS). Chief of Naval Air Training (CNATRA) immediately requested the engineering experts at NAVAIR conduct in-person briefs with the pilots. The briefs were conducted in Kingsville April 3, then Meridian and Pensacola April 4.

“This issue is my number one safety priority and our team of NAVAIR program managers, engineers and maintenance experts in conjunction with Type Commanders, medical and physiological experts continue to be immersed in this effort working with a sense of urgency to determine all the root causes of PEs along multiple lines of effort,” said Vice Adm. Mike Shoemaker, Commander, Naval Air Forces.

To tackle this as effectively as possible, Naval Aviation Enterprise (NAE) is using an “unconstrained resources” approach to the problem, meaning we will not be limited by money or manpower as we diligently work toward solutions.

The T-45C Goshawk is a two-seat, single-engine, carrier-capable jet trainer aircraft used by the Navy and Marine Corps for intermediate and advanced jet training. The T-45 is a derivative of the British Aerospace Hawk and has been in service since 1991. The Navy currently has 197 T-45s in its inventory based at Naval Air Stations Kingsville, Meridian and Pensacola.