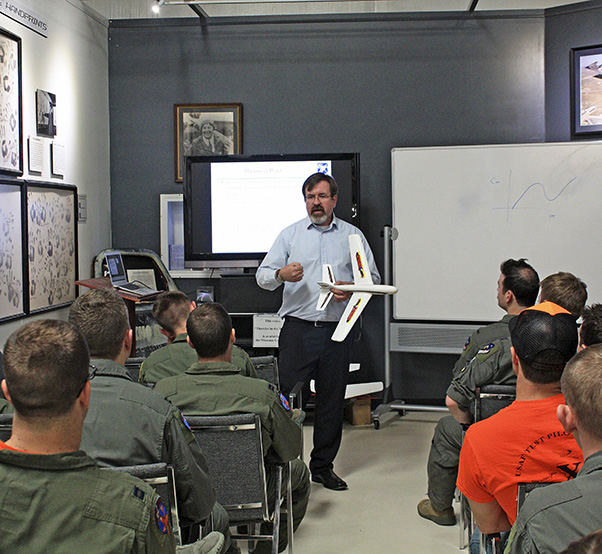 Recently a group of students spent some time in the Air Force Flight Test Museum looking at a range of historic aircraft from the earliest days of flight test here up to present day.

This was not a recreational visit. They were there for a flight sciences course, and the students were from the U.S. Air Force Test Pilot School right here at Edwards.

The flight sciences course is a longstanding part of the TPS students’ curriculum, but this was the first time the course had ever been taught at the AFFT museum.

“We have a course in aircraft stability,” said Dr. Chris Cotting, master instructor of flying qualities with the school. “The basic idea behind the class is I teach the students to look at different aircraft shapes, and also how the weight is distributed along the aircraft. From that they should be able to discern some basics about how the aircraft flies.”

Cotting said he teaches a series of courses to enable students to be able to walk out to an airplane, see the airplane and create an impression in their mind of how the airplane should fly.

“I tell them, ‘The last time you should be surprised about an airplane is when it’s strapped on your back,’” he said. “’Before you ever start to fly you should have an idea of how the airplane should fly so you’re not surprised, or if you are surprised it’s not so dramatic.’”

Cotting said he chose to teach the course at the AFFT museum, because of the broad range of aircraft there.

One student test pilot, Capt. Justin Lechner, said that being at the museum definitely gives a bit of perspective when you can look at different airplanes that are side-by-side and compare them. “A portion of the course, Doc Cotting walks us around and we talk about the design characteristics of the individual aircraft and what those design characteristics mean for the way the aircraft will fly,” he said.

Cotting pointed out the M2-F1 lifting body from the 1960s. “We can talk about it and how it compares to the YF-22 that’s sitting right next to it,” he said.

“Any time the students can have some direct application, some hands-on experience, it really helps them internalize the concepts that we’re trying to teach,” Cotting said. “As opposed to me just standing in front of a whiteboard telling them to memorize a bunch of formulas.” 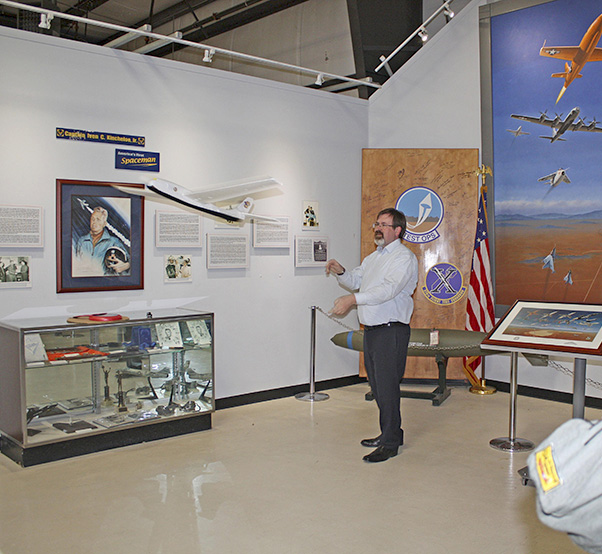 A lot of the flight sciences classes involve engineering, Lechner said. “It’s a lot of math, and being able to look at the airplane, you can kind of see directly how the equations we’re looking at relate to the design features, which obviously drive the flying qualities of the aircraft. So you can see the evolution of how the design happens.”

Capt. Tom Stuart, also a student test pilot, talked about the variety of aircraft available for the course and the benefit of discussing what the mission of each particular airframe was. “A cargo plane versus a fighter or an A-10 – we were talking about why you would want different flying qualities for those missions and how that desire drives different design choices.”

Stuart said that although many of the students had advanced engineering degrees, many were not in aerodynamics. “For me, I was a physics undergraduate working on a (electrical engineering) masters. It was great – qualitative understanding of some more of the aerodynamic theory behind what we’re trying to learn as students at the test pilot school,” he said.

Cotting said that this first course at the museum was a bit of an experiment.

“The course material wasn’t really developed for being in the museum. It was designed more for the classroom,” he said. “I had to improvise a bit.”

“Doc Cotting’s a great teacher. It’s a privilege to have him here,” Lechner said.

Stuart agreed, adding that Cotting has a lot of experience in industry. “His practical experience gives a lot of insights to the material he’s presenting,” Stuart said.