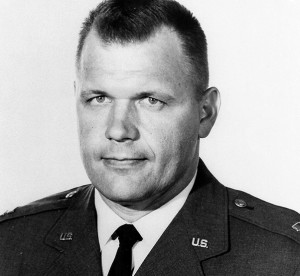 On April 7, 1966, Air Force Capt. Robert Barnett was the pilot of a B-57B Canberra on a strike mission over Laos when his aircraft was hit by hostile ground fire and crashed. Barnett was declared killed in action. His remains were recently recovered and the Texas native was laid to rest April 7, 2017, at the Texas State Cemetery in Austin, Texas.

A 51-year journey, to the day, came to an end last month. Air Force Capt. Robert Barnett was laid to rest April 7, 2017, with full military honors at the Texas State Cemetery in Austin, Texas.

“The care and dignity exhibited at the funeral was extremely moving,” said Debra Coffey, Barnett’s daughter. “We were so proud of him. We had family and cousins come in from all over. It was truly a celebration of a life of service.”

That life ended April 7, 1966, during a strike mission over Laos. While making a dive-bombing attack, Barnett’s B-57B Canberra was hit by hostile ground fire, crashed into a mountain and burned. No parachutes were seen, and the hostile threat in the area prevented a search and rescue or ground inspection of the site. Following the crash, Barnett was declared killed in action.

In 2005, a joint U.S. and Lao People’s Democratic Republic team visited the crash site. In late 2014 and early 2015, three excavations of the site were conducted, recovering possible human remains, life support items and material evidence. The remains were sent to the Defense POW/MIA Accounting Agency’s laboratory for analysis. To identify Barnett, DPAA scientists used circumstantial evidence and dental comparisons, which matched his records.

DPAA representatives then notified the Missing Persons Branch at the Air Force Personnel Center that Barnett had been positively identified. Branch members also coordinated with Air Force Mortuary Affairs to produce the final casualty report and to make sure awards and decorations were in order.

“We’ve been the family’s focal point for more than 50 years,” said Sandra Kolb, the MPB chief. “During all that time, our staff has provided the Barnett family with reports from government investigations and excavations, and supported the family’s attendance at numerous annual meetings hosted by the Department of Defense.”

MPB staff members maintain contact with about 3,700 family members. They travel about 10 times a year to various regions around the country, including two annual meetings in Washington to respond to information requests and to provide important updates to family members.

As a liaison to the survivors, the MPB team collects, evaluates and disseminates to next of kin information from government agencies concerning crash and grave site investigations, excavations, live sightings and refugee interviews. MPB team members work closely with the Armed Forces DNA Identification Laboratory and Air Force Mortuary Affairs to obtain DNA samples from family members, which is often necessary for the identification of recovered remains. Staff members provide families with new information they receive from DPAA on their loved one’s case and respond to family members’ requests for information.

“On many occasions, we have reached out to officer and enlisted promotions personnel to better understand Air Force promotion policies during the Korean and Vietnam wars,” Kolb said. “It’s an education process for those of us who are not familiar with the personnel policies of the time.”

Today, there are 1,474 Airmen unaccounted for from the Korean, Cold and Vietnam wars.

This year, Barnett would have been 84. For Coffey and other family members, there is finally closure and gratitude.

“I want to thank everyone over the years who helped make this happen,” Coffey said. “They said our country wouldn’t forget him and they were right. They didn’t.”