Sonic booms may be sweet music to many around the Antelope Valley. However, not everyone across the country appreciates their windows and pets getting rattled by shock waves. Someone living in a supersonic corridor may experience 15-30 booms a day.

He presented ways engineers are developing supersonic airplanes that can break the speed of sound, while diminishing the sonic boom.

“I like sonic booms, but 30 a day would be a lot,” confessed Cliatt. Speeds are now limited to 0.9 Mach over land. “If we can double that, we would go from Los Angeles to New York in about two hours instead of four or five.”

Using Schlieren photography, previously invisible shock waves produced by aircraft can now be seen. Engineers are using those images to design aircraft for smoother and quieter aerodynamics and changing wing shapes that will disperse the sound energy before it hits the earth — preventing or lessening sonic booms. NASA and Lockheed Martin have teamed up to build a quiet Supersonic Technology (QueSST) X-Plane that will make flight greener and quieter. 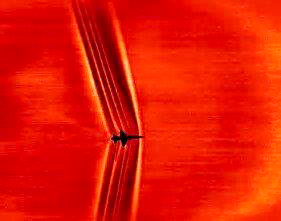 Schlieren images provide a unique glimpse of the shape of shock waves created by supersonic jet aircraft. Engineers can use this information to design sleeker, quieter supersonic aircraft.

At the workshop, teachers used simple objects such as a balloon, PVC and a laser — light to see how sound waves can be seen. Bringing experiments back to the classroom exposes students to aerodynamics, sound engineering and math in a fun and logical way.