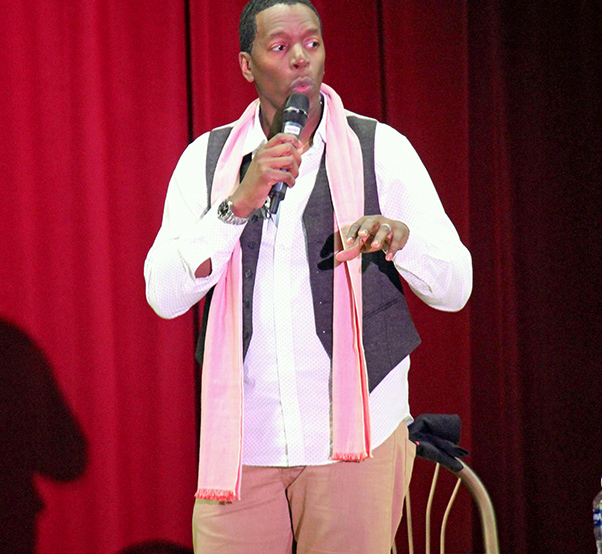 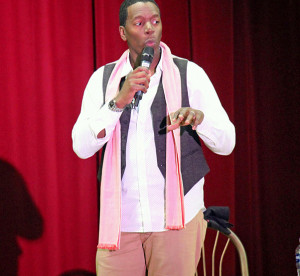 The free comedy show was brought to Edwards AFB by Air Force Entertainment and hosted by the 412th Force Support Squadron. Also featured on the show was Air Force veteran and touring comedian Dennis Gaxiola and a special guest, local comedian Sam Ridley.

Edwards engaged with the crowd throughout the show by stepping off stage and making his way from table to table. His spot-on impressions of various celebrities, including actor Denzel Washington, had the  audience laughing throughout the 90-minute show.

After the show, audience members were able to pose for photos and get autographs.

“I didn’t know Dean Edwards before the show, but decided to take advantage of a free comedy show,” said Tech. Sgt. Tina White, 31st Test and Evaluation Squadron, as she was in line to take a photo with Edwards. “I’m glad I did!”

“The show was awesome!” added Staff Sgt. Kynetta Small, 31st TES, who attended the event with White and LaKresha Aodridge. “I think they should do shows like this more often!”

Edwards rose to fame performing on “Russell Simmon’s Def Comedy Jam” on HBO. As one of the stars of MTV2’s “Guy Code,” Edwards helped the show become one of the network’s most successful programs. He also hosted TV One’s clip show, “Vidiots” and serves as a correspondent on BET’s new program, “Don’t Sleep.” Edwards performed on “Comics Without Borders” and “Showtime at the Apollo.” He also appeared on “Saturday Night Live” for two seasons.

He is a Bronx, New York native who served six years in the U.S. Army Reserve and currently lives in New York City.