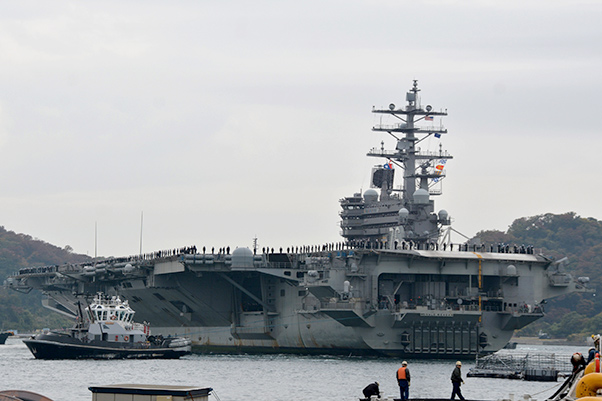 Ronald Reagan’s crew shifted colors at 11:54 a.m. and made way to conduct sea trials in the final phase of the ship’s selective restricted availability (SRA) maintenance period, which began January 10.

“I am extremely proud of the Reagan crew’s accomplishments up to this point of our SRA period,” said Capt. Buzz Donnelly, commanding officer. “We are all looking forward to completing sea trials and returning to operations in the 7th Fleet.”

During sea trials, Ronald Reagan’s crew will undergo multiple training and qualification exercises to include engineering and medical drills as well as air, flight deck and hangar bay operations to evaluate the performance of Sailors and their departments.

“A major priority is the safety of our crew as we continue to refine our mission readiness of our ship, and crew and return to sea,” said Donnelly. “To achieve maximum readiness, it is imperative that we make every effort to identify and reduce risk.”

According to Donnelly, with Ronald Reagan’s newest technology and well-experienced crew, her return to operations in the U.S. 7th Fleet will mark a significant milestone for the forward-deployed naval forces, reaffirming the United States commitment to the region.

“The crew has worked tirelessly to get the ship ready to succeed at our mission at sea,” said Capt. Paul Lanzilotta, executive officer. “In partnership with our SRF (ship repair facility), Puget Sound Naval Shipyard and Sumitomo Heavy Industries teammates, we’ve been able to complete a tremendous amount of work in a very compressed period. The ship is clearly in an improved material condition and we’re excited to be back into operations.”

Ronald Reagan’s departure from Yokosuka marks the first time the ship has been underway since completing her 2016 patrol Nov. 21, 2017.

Ronald Reagan, the flagship of Carrier Strike Group 5, provides a combat-ready force that protects and defends the collective maritime interests of its allies and partners in the Indo-Asia-Pacific region.