There’s hardly a day at the Vietnam Veterans Memorial that Patrick Pellerin doesn’t see an emotional, often tearful veteran or family member looking up the name of a loved one on the wall.

Pellerin, an Army Vietnam veteran himself, now wears the uniform of a National Park Service volunteer, manning a post at the wall one day a week.

Since he began his volunteer work in January, Pellerin has been assigned a number of duties at the wall. First and foremost, he said, is ensuring public safety.

On some days, large crowds of tourists and veterans from all over the world descend on the wall. Should someone become ill or injured, Pellerin is standing by to call paramedics.

Most of his time, however, is spent answering questions from visitors, he said.

The numbers occasionally will increase if it can be shown that a veteran’s death was somehow war-related, he said, explaining that when the Department of Defense receives a request, it interviews the veteran’s physician to make that determination.

Pellerin walked over to the wall made of gabbro — a black igneous rock that reflects like a mirror. He pointed to the name of Billy M. Smith.

“See the chisel mark,” he said, referring to Smith’s name. “It looks newer than those around it. That’s because it was just put there.”

Placement
Pellerin explained why Smith’s name was placed where it was; placement being a very common question asked by visitors.

There are two factors for placing Smith’s name where it is, he said. First, Smith was wounded, Nov. 8, 1963, the date being the first factor. Usually it is the date of death, but not always, as in Smith’s case he died much later.

Pellerin said he didn’t know the details of Smith’s death, but he died in 1995 as a result of wounds suffered that day.

The nonprofit the Virtual Wall lists Smith – a native of Commerce, Texas – as being born, Aug. 16, 1940, and being wounded in Darlac Province, South Vietnam, as the result of hostile small-arms fire. He was a specialist 5 at the time, a rank no longer used in the Army, but equivalent in pay to a sergeant.

Like Smith, each veteran has a story, Pellerin said.

Another thing Pellerin does is supply visitors with paper and pencil. He said he has loads of that stuff and it’s common practice to make an etching of the name of a friend or loved one as a keepsake. 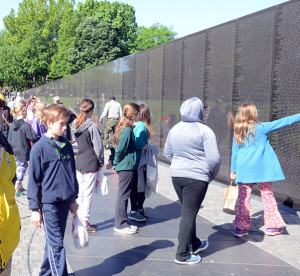 Patrick Pellerin is a volunteer with the National Park Service, assisting visitors at the Vietnam Veterans Memorial in Washington, D.C. He’s pictured here on the left May 8, 2017.

Pellerin’s story
Pellerin said he feels fortunate to be alive and not have his name on the wall. After graduating from Louisiana State University with a major in journalism, he joined the Army in January 1968, serving for three years and attaining the rank of captain.

His first assignment was actually located almost exactly where the wall stands today. He was assigned to the Army’s Science and Technology Center, then housed in a World War I building on the National Mall.

Pellerin said his job was to take scientific papers on enemy and allied equipment and weaponry and “translate it into English” so that generals and other Army leaders could understand it. Most of the material, he said, had to do with the pros and cons of the gear and how effective it was.

Following that assignment, Pellerin finished out his last year in the Army in Vietnam. He served in the Transportation Corps at Qui Nhon Support Command in Binh Dinh Province on the South China Sea. He said their mission was to move supplies to bases in the central highlands.

Their logistics base was occasionally hit by enemy mortar or rocket fire, he said, but he was never wounded and none of the Soldiers he worked with were either. “We were very fortunate,” he said.

In 2010, Pellerin, his wife and a group of other Vietnam veterans and their family members returned to Vietnam for a tour of that country. He said it was amazing to see how friendly and well treated they were by their former enemies.

Today, Pellerin is a resident of Washington, D.C., and is retired from his work as a congressional lobbyist. He now volunteers at the wall one day each week, he said.

Occasionally, Pellerin says he sees visitors from Vietnam at the wall and he shows them around like he does everyone else. Pellerin said he hopes there will be no need for future wars and more monuments for those who give their life defending freedom.