The defense system that protects the United States from ballistic missile attacks now outpaces the threat from adversaries out to 2020, and the Defense Department is advancing the capability to stay ahead of the threat into the future, defense officials said on Capitol Hill June 7.

“The U.S. homeland is currently protected by the ground-based midcourse defense system — the GMD system. Improving the capacity, reliability and effectiveness of the GMD system is one of our highest priorities,” he added.

Funding for 2018
Harvey told the panel that the fiscal 2018 proposed budget — which Syring said in his written testimony requests $7.9 billion for the Missile Defense Agency — would fund a redesigned exo-atmospheric kill vehicle and long-range discrimination radar.

It would also help to lay the groundwork for a new radar in Hawaii, continue funding for advanced discrimination center technology and space-based kill assessment programs, and remain on track to complete deployment of remaining interceptors in Alaska by the end of this year to bring the total to 44, the assistant secretary said.

“We’re also moving forward with efforts to bolster our defenses against advanced cruise missiles,” he added.

Allies, partners
From a regional standpoint, Harvey said, the 2018 budget request continues the deployment of missile defenses tailored to threats in Europe, the Middle East and the Asia-Pacific region.

“In Europe, we would continue to implement the European Phased Adaptive Approach, EPAA, and work in close collaboration with our NATO allies to develop an advanced network of sensors and interceptors,” he said. The EPAA addresses the threat from Iranian short- and intermediate-range ballistic missiles to U.S. troops and interests in Europe. 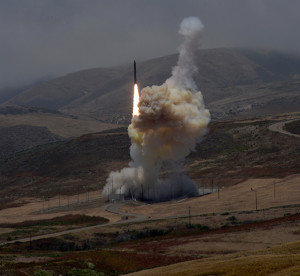 A long-range ground-based interceptor is launched from Vandenberg Air Force Base, Calif., May 30, 2017. It successfully intercepted an intercontinental ballistic missile target launched from the U.S. Army’s Reagan Test Site on Kwajalein Atoll. This was the first live-fire test event against an ICBM-class target.

The budget request supports the Aegis Ashore system scheduled for deployment in Poland in the 2018 time frame, Harvey said, noting that NATO allies have committed to spend more than $1 billion on NATO ballistic missile defense command and control, and many U.S. allies are improving national BMD capabilities.

“In the Asia-Pacific, our force posture includes Aegis BMD-capable ships along with Patriot batteries deployed in Japan and South Korea, and the recent deployment of [Terminal High Altitude Area Defense] to South Korea. We’ve also converted the THAAD battery deployment to Guam to permanent status in response to North Korean threats,” he added.

The United States maintains a robust ballistic missile defense presence in the Middle East, including land- and sea-based assets deployed in defense of forward-located forces and those of allies and partners, Harvey said.

Looking ahead, the assistant secretary said, means ensuring that the U.S. investment strategy and priorities “balance the needs of addressing the most dangerous threats we confront today while positioning ourselves to respond to emerging threats over the next decade.”

Outpacing threat
In his testimony before the panel, Syring showed and narrated a video of the May 30 ground-based interceptor test over the Pacific Ocean, submitting his written statement for the record in lieu of an opening statement.

The day after the May 30 interceptor test, Syring said during a phone briefing with reporters that the interceptor tested outpaced the threat to the United States through 2020.

In his written testimony, Syring said the MDA 2018 budget request will continue the development of reliable, increasingly capable, and state-of-the-art defenses against ballistic missiles for the nation, deployed forces, allies and international partners.

“Everything that this committee has supported over the last four years,” he told the subcommittee, “has been targeted toward a near-term — which is now part of the program of record and a fielded set of capabilities — a mid-term and a far-term capability.”

Mid-term is defined by 2020, he added, “and everything that we are working on and fielding is to stay ahead of the threat by 2020.”
He told the panel, “Today we’re ahead. We need to stay ahead.”

The sensor and discrimination work to improve the capability of the system is on a trajectory and in large part fielded, Syring said.

“Where we need to be prudent and constantly vigilant on is what is the capacity increase that we can expect from North Korea and what is our capacity needed to meet that threat,” the admiral said.