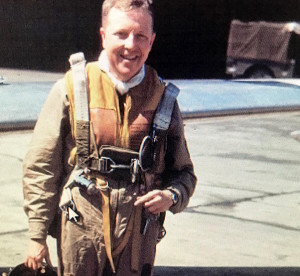 Col. Robert Kirtley was born July 26, 1917 in Spartanburg, South Carolina. He is a World War II and Korean War veteran who served in the Air Force for more than 25 years. He graduated from Wofford College, and commissioned as a 2nd lieutenant in 1940. His first assignment was with the 27th Pursuit Squadron, First Pursuit Group, at Selfridge Field, Mich.

He is a World War II and Korean War veteran who served in the Air Force for more than 25 years. Like many men from his generation he has mastered the art of the understatement.

On turning 100, he said, “Well, one hundred years is a long time,” and reflecting on some of the most vicious fighting during World War II, he said, “I didn’t really fancy getting shot at.” Many of his greatest adventures sprang from his love of flight, and in that way, his story is not unlike any of the other boys and girls in the decades since that attended an airshow and caught the aviation bug. Flying is central to his identity.

“I can’t imagine describing him without adding the words ‘fighter pilot.’ It’s part of who he is, through and through,” said John Hoberg, one of Robert’s four grandchildren. “When I was a kid, he was the one who taught me how to shoot, fish, boat and ski. When I was older, I started to comprehend everything he had done during his long career in the Air Force, and I began to look up to him as an American hero.”

Robert traces the origin on his Air Force career to building model planes. He said they were little more than tissue paper, balsa wood and “a little wind-up thing,” but they had the 27th Fighter Squadron insignia. Visits by aviation giants Charles Lindbergh and Amelia Earhart further piqued his interest, and he got a job working at the local airport. He restored Taylor Cub aircraft, and for every 10 hours of labor, he got one hour of flight time in a Piper J-3 Cub.

He wrote to Eastern Airlines to inquire after a copilot position, and they responded favorably, encouraging him to get flight training through the United States Army Air Forces. He graduated from Wofford College, and commissioned as a 2nd lieutenant in 1940. His first assignment was with the 27th Pursuit Squadron, First Pursuit Group, at Selfridge Field, Mich., although he soon was tasked to be one of six tests pilots for the P-38 Lightning at Wright-Patterson Field, Ohio.

“I was happy as a lark. Our job was to do service tests on these aircraft, and then develop fuel consumption and information for the tech orders and the ground crews as they were developing procedures for the maintainers. The new P-38 was a totally different departure from all the (previous) fighters,” said Robert. “We were flying P-35s and P-26s, so when I climbed into that P-38 and cranked up both those engines … everything was running very quiet, and it drove like a new Cadillac.” 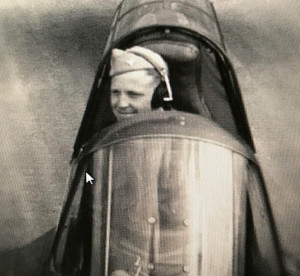 Col. Robert Kirtley prepares to taxi an aircraft on an unidentified airfield as a young Army Air Corp member. He was born July 26, 1917 in Spartanburg, S.C. He is a World War II and Korean War veteran who served in the Air Force for more than 25 years. He completed 50 combat missions in Africa and took part in the Invasion of Sicily. He is credited with destroying four aircraft during his tour and was awarded the Distinguished Flying Cross and 12 Air Medals.

It was not long before the Pearl Harbor attack caught Robert and his young family off guard.

“We were on the way back from South Carolina to Selfridge in the winter time and as we drove by Columbus, the news came out of the Pearl Harbor attack. And my wife was sitting with my daughter in her lap, who was about six months old and has now just turned 70, and my wife said to me, now what?” Robert remembered.

He said the base commander was waiting for his return and immediately ordered him to operations. He told his wife goodbye and went to San Diego, where he and his unit were supposed to get on a carrier for transport to the Philippines. There were no available carriers due to the attack and the unit moved from San Diego to Mines Field, part of modern-day Los Angeles International Airport, for six months. He and his unit would finally head to England by boat in 1942.

“They put us on the RMS Queen Mary — a fighter squadron, a bomb squadron, and an infantry division. The Queen Mary was designed to carry 2,300 passengers in very luxurious style like the ol’ Titanic, and we put like 19,000 people aboard that Queen Mary,” he said. “Just before we got to England, we were joined by three British warships. I was up on the deck watching this thing, and we were about a day from landing in England, and all of the sudden there was all this activity. Evidently they had spotted a submarine, and these ships were weaving back and forth and one of them cut right across from the Queen Mary, and didn’t make it, and it cut it right in half.”

Two hundred and thirty-nine lives were lost. And that was his introduction to the randomness of war. He and the 82nd Fighter Group were soon assigned to Africa. When asked what he remembered about his time in Africa, he said that he remembered being afraid. They were up against some of the finest pilots in the German Luftwaffe and at one point, he said, something like 10 pilots from his squadron were killed in a single month.

“I was frightened all the time. We would take off on a mission, and I’d be chewing gum, and the closer we go to the bomb line the more my mouth would dry out, and by the time I got to the bomb line, from then on it was enemy territory, the gum was sticking to the roof of my mouth — that’s how scared I was,” he said.

He completed 50 combat missions in Africa and took part in the Invasion of Sicily. He is credited with destroying four aircraft during his tour and was awarded the Distinguished Flying Cross and 12 Air Medals.

After he returned to the United States, he served until the conclusion of the war and returned to civilian life for a year. He briefly worked in jewelry sales, although it was not his “cup of tea,” and he could not wait to go back into the Air Force. And he continued to serve until 1968, preferring any position that kept him in the cockpit and close to aircraft. He retired as a colonel, having directly briefed President Eisenhower and worked alongside Henry Kissinger. One of his more memorable experiences was his introduction to early model computers while serving as the Supreme Allied Commanders personal representative in England. 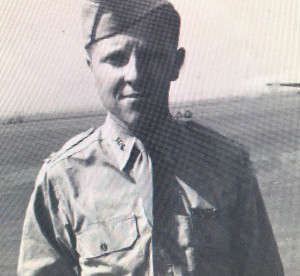 Col. Robert Kirtley enjoys a soft drink as a young Captain on a flight line. He was born July 26, 1917 in Spartanburg, South Carolina. He is a World War II and Korean War veteran who served in the Air Force for more than 25 years. He graduated from Wofford College, and commissioned as a 2nd lieutenant in 1940. His first assignment was with the 27th Pursuit Squadron, First Pursuit Group, at Selfridge Field, Mich.

“This computer system was an IBM 704. Huge thing. We had to put to put it in the ballroom of this British mansion. It lined the whole thing. It was loaded from punch cards. I was convinced there was no way this system was going to work, but they insisted and so we did it,” he said.

He joked about the huge capacity they had – 1,600 total bytes. Today, Robert helps other members of his retirement community fix their computer and mobile devices. Working with technology helps keep his brain sharp, he said.

For him, his service boils down to the flying, and the camaraderie he shared with other Airmen. He describes them as the best people in the world. The Air Force gave him many chances to see the world and changed his life in ways he never anticipated.

“I was a country-town boy. When I get on a train, from Spartanburg to San Antonio, I had a meal ticket to eat in the diner. I was not very smart. I went in the diner, I had a good dinner, and then they brought me a clear soup. Which I started eating. It didn’t have much taste. A waiter came up to me he said, ‘sir, that’s a finger bowl,’” he joked, laughing at the memory.

His family is holding a multi-day celebration in Williamsburg, Va., to honor him. Members from the 1st Fighter Wing at Joint Base Langley-Eustis will join them to present a small token of gratitude for his service.

The Air Force is celebrating its 70th Anniversary this year and much of the celebration has focused on its incredible milestones. Talking with Mr. Kirtley, it’s clear that Air Force milestones are intrinsically linked to Air Force veterans.

“I am a better person for having talked to the many World War II vets I’ve met while learning about my grandfather’s history. I never miss a chance to ask questions of a vet at an air museum. And by listening and remembering their stories, I am helping to keep their legacy alive. It’s important we all do this. They are the story of all of us,” John said.