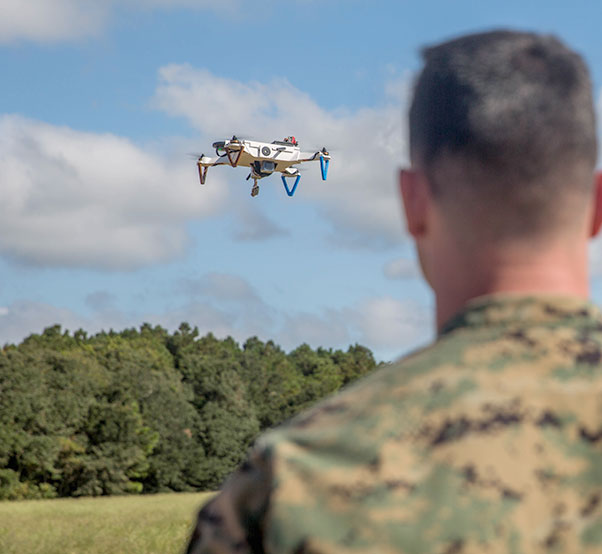 A Marine takes control of a small unmanned aerial system during flight testing at Camp Lejeune, N.C., Sept. 27, 2017. Marines and technicians from the U.S. Army tested the craft to learn its capabilities and practical application in field environments.

The technicians and engineers with U.S. Army Research Lab gathered Marines from different military occupational specialties to demonstrate the usefulness and convenience of the additive manufactured small unmanned aerial systems.

Unlike systems the military has in use already, the additive manufactured SUAS has the flexibility to adhere to all types of different missions, and can be created much faster.

“At this point we are focusing on intelligence, surveillance and reconnaissance missions,” said Eric Spero, a team leader in the vehicle technology directorate of the U.S. Army Research Lab. “We have different cameras such as an infrared and a day camera; there are different things we can do like stream the video to systems or a heads up display and record it for later viewing.” 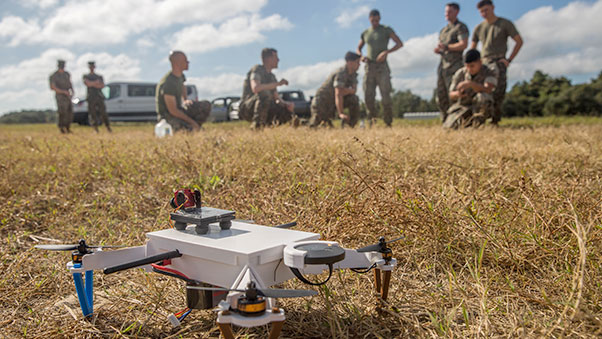 Marines prepare to test a small unmanned aerial system at Camp Lejeune, N.C., Sept. 27, 2017. Technicians from the United States Army Research Lab demonstrated to the Marines how easy the system is to create and have it fully operational with little to no training.

Researchers have created a catalog for the crafts that allows service members to select an SUAS that is tailored to fit the needs of the mission.

Troops simply pick the SUAS that fits their mission objectives and download the information that allows the parts to be 3-D printed.

An additive manufactured SUAS can be created, constructed and ready for operations in approximately 24 hours.

“Basically what we are doing is combining two emerging technologies,” said John Gerdes, a mechanical engineer at the U.S. Army Research Lab. “We have taken 3-D printing and quad-copters and created a means of giving troops a customized vehicle right when they need it, with the capabilities they need from it, on demand.”

Instead of fitting troops to systems that are already in use such as the RQ-11 raven or the RQ-20 puma and forcing them to compromise to complete the mission, they can instead take their needs and create a vehicle specific to the job, said Gerdes.

“These craft are the future because they’re protected by obsolescence,” said Gerdes. “We are able to give troops the technology almost immediately by printing new parts and making slight adjustments so they will always have a craft that is able to complete the mission.” 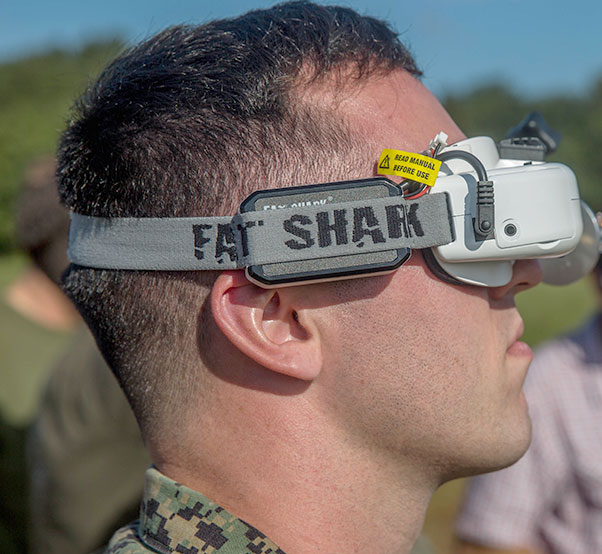 A Marine looks through first person view goggles connected to a, small unmanned aerial system at Camp Lejeune, N.C., Sept. 27, 2017. Marines performed a practical application to test the systems’ operation as well as the performance of the new craft in a field environment.