“I was expecting a good event and it turned out to be a great event,” said Auxiliary President Gloria Meza. “The Fulcos did an amazing job at entertaining the guests and everyone seemed to have a great time.”

In 2013, the United States Department of Veterans Affairs released a study that covered suicides from 1999 to 2010, which showed that roughly 22 veterans were dying by suicide per day, or one every 65 minutes. Other studies came up with different numbers but the bottom line is: depression, PTSD, lack of employment and homelessness are triggers for suicide.

“We have people that say suicide crosses their minds every day. We do our best to point them in the right direction,” added Meza.

Vendors and organizations such as Vets4Vets, Point Man, Mental Health America and representatives from Congressman Steve Knight’s office were on hand to support the event.

“Our community really came together and were very generous,” said Meza, adding that all money is kept in the Antelope Valley to help local veterans. 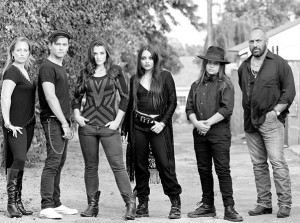 The Fulcos — Vanessa, Jesse, Joei, Stevie, Tyler and Joey ­— were honored to entertain guests during the 3rd Annual Suicide Awareness Fundraiser at VFW Post 3000 in Quartz Hill, Calif. Coming from a family of veterans, The Fulcos instilled patriotism into their children and play for many non-profit organizations.

The event started with every able-bodied guest standing for a pure rendition of the National Anthem, followed by “Star Spangled Through and Through,” a song written by The Fulcos when the family band felt that Americans needed to come together.

“Music is universal — it can change a mood or set a tone,” said Vanessa Fulco, mother and keyboard player for the band. “If we can use our talents to bring good and give back to those who have given so much to us — we’re in!” Vanessa said her father-in-law was a Marine and instilled strong patriotic values that have been passed down to her family.

The Fulcos will be playing Wednesday evenings at Post 3000. The general public is welcome, no membership required.