Aviation Cadet Paul Day was looking at his instruments and straining to hear any communications over the sound of his radial engine, as he flew blind in the clouds all alone.

What seemed like just another routine training flight had now become a struggle for life itself, as he and more than a dozen other young aviation cadets came face to face with the dangers of flying — not in combat, but facing the wrath of the one adversary that has plagued aviators for generations: the weather.

March 18, 1942, just months after Pearl Harbor, aviation cadets that had joined up for a chance to become combat pilots knew full well that sooner or later America was going to get into the fray of World War II.

The cadets, now in their second phase of training, called basic, were flying more powerful aircraft with military instructors from one of the largest West Coast training fields: Bakersfield’s Minter Field. That morning as cadets and instructors prepared themselves for another night navigation mission, little did they know that they were on the doorstep of a pending disaster that would take place over the desert, foothills and mountains of the Antelope Valley.

Late in the day, the BT-13 training aircraft lifted off from the field with motors growling. The group formed up to fly the first leg of their journey, to the Army Airfield at Daggett, east of Barstow. They all landed and checked in to report a fairly incident-free flight. The instructors briefed them on the return leg that would take them over Palmdale Army Airfield, then turning north over the Tehachapi Mountains and back to Bakersfield. The altitude they were to fly would be 8,000 feet, climbing to 9,000 feet over the Tehachapi’s, as an updated weather forecast showed broken clouds at 4,000 to 6,000 feet. It was now 7:30 and the Cadets took off, never knowing that for many it would be their last take off and their fate was waiting in a growing bank of clouds over the Antelope Valley.

Our pilot, Cadet Paul Day, was with a group led by 2nd Lt. John G. Baraba as they reached Palmdale and looked directly into a cloudbank that reached an altitude of 12,000 feet. Climbing to 14,000 feet to go over the top, Baraba instructed his cadets to follow him down one at a time, believing he was now over Highway 99 south of Bakersfield. Finding a hole in the clouds, he dropped down only to find he was over Gorman and at 5,000 feet. Only one other cadet made it down with him, as they hugged the hilltops and followed the 99 over the Tejon Pass towards Bakersfield. At this point, Baraba lost contact with his other cadets. 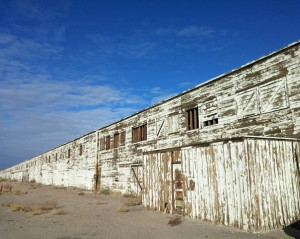 The current remains of Daggett Army Air Field, the last stop before the ill-fated mission.

Day had flown around the top of clouds and, not hearing any more communications, made the decision to find a hole and press on. It was 9:30 and the windscreen was nothing but a gray mist and the radio crackled with static. The young airman, alone in his cockpit in the night, straining to see the lights of a city town or road, instead found the desolation of a crash site in the mountains of the Tehachapi’s — his own. Amid the sounds of his engine coming to an abrupt halt and the momentary shrieks of a self-destructing airframe, Paul Day’s life journey had come to an end. But he was not alone.

Four other cadets would suffer the same fate that night. It wasn’t known until the next morning, when an instructor pilot from Lancaster’s Polaris Flight Academy radioed the grim news that he had found the wreckage of two of the missing five. Cadet Donald Carne of Ross, Calif., was found five miles northeast of Quail Lake. Cadet Paul Davis’ (of Boulder, Colo.) wreck was found near Cummings Mountain, 10 miles south of the Tehachapi Women’s Prison. Three days later, the body of Cadet Paul Everett of Camden Point, Mo., was found in the wreckage of his plane in the foothills of the Tehachapi’s, 20 miles due west of Rosamond. It was a week before a tire and a seat cushion were found on the shore of Castaic Lake on the Tejon Ranch. Upon dragging the lake, the body of Cadet Eugene Crites of Roseburg, Ore., was recovered on March 30.

Four of the five made their final journey home to waiting families who said goodbye and dealt with the grief of the loss of a beloved son or brother who had never made it to the battlefields around the world. It just didn’t seem right for lives to end this way, but in World War II, the loss of life in stateside accidents was just as high as those lost in combat. 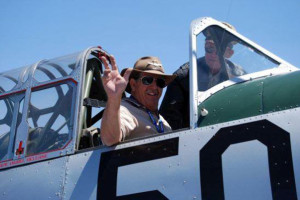 Only one pilot was not accounted for. On June 18, 1948, airmen at Muroc Air Force Base received a report that an old airplane crash site had been discovered in Oak Creek Canyon west of Mojave. Upon investigation, the following information was found: a BT-13 type aircraft with radio call number 11510, indicating that the plane’s last preflight was at Minter Field, March 18, 1942. Also in the vicinity of the wreck site was the remains of one body, identified as Cadet Paul Day, who appeared to have either crawled from the wreckage or been thrown out upon impact.

Day’s family spent the years of World War II in a state of limbo. Day’s mortal remains weathered the storms and climate of the Tehachapi’s, as a family weathered the uncertainty of a son lost in training who had yet to come home. On that night around 9:30 in March of 1942, Day ended up taking his last breath in service to our country and he would remain with his fallen aircraft for six years, before being discovered on June 18, 1948 — in the hills of our Tehachapi Mountains!

So there you have it, a day when airplanes fell from the sky and one of the lesser-known disasters in the skies of the Antelope Valley took place. We who live here take it for granted, as we look at the clouds that roll across the mountains that surround us, never once thinking of the dangers they created for young aviators of days gone by. Mother Nature and man have always had a strained relationship — on one hand giving us climates that create and nurture life, but on the other hand dealing the cruel hand of death to her children when she’s not respected.

We remember the five and their families, who are now just a footnote and a short story in the history of the Antelope Valley, and thank them for answering the call to serve our nation. Come this March 18, I may just look to our north and whisper a prayer for the loss of youth — our young who had so much to live for, and the sentry who for six years looked over our Valley in spirit.