The likelihood is high that the Army won’t get to pick the time and place of its choosing for the next battle, said Gen. Robert Abrams.

But it’s likely that the next battle will take place in a megacity, said Abrams, commander of U.S. Army Forces Command. He spoke, Nov. 30, in Livonia, Mich., during the Future Ground Combat Vehicles Summit.

“The chance of fighting in a megacity is going to go through the roof,” he said, pointing out that there are currently 25 megacities across the world. A megacity is defined as a city of 25 million or more inhabitants. By 2035, the number of megacities is projected to double.

Coincidentally, 2035 is also the target delivery date for what is currently the Army’s conceptual Next Generation Combat Vehicle, or NGCV, he said.

Recent fighting in countries throughout the Middle East validate the value of combat vehicles in urban areas, but also reveal vulnerabilities, Abrams said. The NGCV will address such shortfalls.

Dense, urban terrain diminishes the effectiveness of fighting vehicles, which are impacted by obstacles, large civilian populations, and confined spaces, he noted. In such confined spaces, enemy dismounts are better able to isolate individual vehicles at close range, and employ anti-armor fire and IEDs of all types.

In light of those difficulties, requirements for NGCVs will include enhancements to optimize performance in urban environments, he stressed.

Other NGCV requirements
Another key consideration in the design of the NGCV is that the vehicle must contribute to a reduced logistics tail, or supply line, Abrams said. Reducing the logistics tail will enable the maneuver force to move more quickly and with greater agility.

The general offered several ways this could be accomplished. If the NGCV were to employ hybrid energy systems, for instance, that could reduce the need for fuel resupply convoys.

Other ways to reduce sustainment requirements include such things as speed diagnostics that support field maintenance and component ruggedness and life extension, he said.

“That’s an aggressive list,” Abrams said. “And, it is unlikely all of these can be built into the Next Generation Combat Vehicle in that timeline. But that’s OK.”

What’s important, he said, is that those items signal a green light from the Army to industry to deliver the most capable system that can be produced with existing technology, anchored in doctrine.

Another challenge, he pointed out, is balancing the age-old tradeoff of survivability with weight, agility and lethality.

“Ideally, we would be able to trade weight for protection other than armor,” he said, explaining that will require advances in material science, along with innovations in active and passive defenses.

Whatever the outcome, the end product must be able to dominate peer enemies that have fielded their own version of a next-generation vehicle, he said. 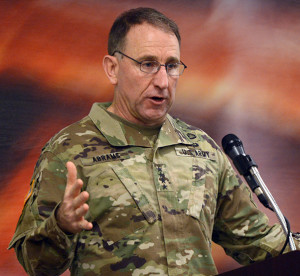 Avoid envy syndrome
Abrams said when developing the NGCV, the Army must resist the urge to do side-by-side comparisons with other combat vehicles.

For instance, the Russian T-14 tank provided “an avalanche” of recent discussion about their approach of putting all the crew in the hull for the first time for protection, using auto-loaders and re-introducing capabilities to launch missiles through the main gun, Abrams said.

“Don’t rush to judgment that Next Generation Combat Vehicle should have similar capabilities like an automated turret and putting all the crew in the hull,” he said.

“Instead, the conclusion of what the vehicle should look like should be based on optimizing advantages for how we conduct combined arms maneuver and not simply that we want to match Russian or other country approaches,” he said.

Realistic approach
Abrams outlined a strategy for pursuing the NGCV.

“I will continue to recommend that we lay out a realistic program, matched with engineering realities and communicate that frequently to Army senior leaders and to Congress. That is a far better approach in my opinion, than our history of overpromising and under-delivering,” he said.

He pointed to the Armed Reconnaissance Helicopter Program that was terminated in 2008 as a “cautionary tale of what happens when we adopt too aggressive a timeline linked to gold-plated requirements.”

That does not mean there should be a sub-optimal solution, he added.

The NGCV must have “leap-ahead, breakthrough technology which should be a revolutionary improvement over what’s available today,” he said, noting his own experience in the 1980s as an armor officer, going through the transition to the M-1 Tank and M-2 Bradley Fighting Vehicle.
Those were revolutionary in many aspects, he said.

The M-1 introduced superior crew protection, all-condition precision firepower on-the-move, maneuverability and dash speed which altered the geometry of the battlefield and provided decisive overmatch against Cold War enemies and every enemy since then, he said.

The Bradley was the first true infantry fighting vehicle, he said. Unlike with its predecessor, the M-113 Armored Personnel Carrier, the Bradley gave the Army the ability to get troops to their objective under armor with turret weapons and multiple precision direct fires options: the Bushmaster Chain Gun, Coaxial Machine Gun and TOW anti-tank missile.

“Today, 40 years later, they’re still our primary fighting vehicles,” he concluded. “We’ve made tremendous incremental improvements but they are reaching the end of their lifecycle. We’re in a race against time.”