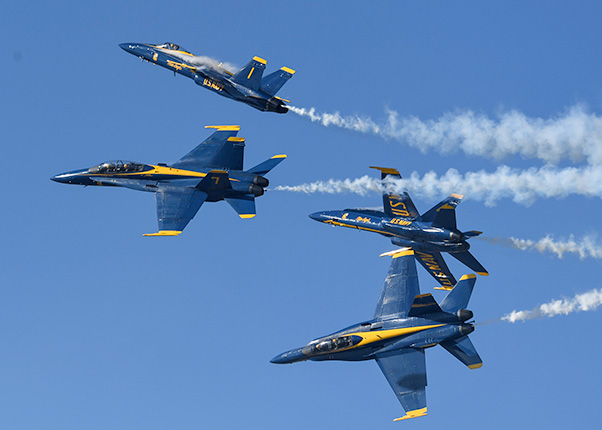 F/A-18C Hornets assigned to the U.S. Navy Flight Demonstration Squadron, the Blue Angels, perform an aerial demonstration during the Naval Air Station Jacksonville (Fla.) Air Show. The show celebrated the Blue Angles’ heritage, which traces back to 1946 at the squadron’s birthplace of NAS Jacksonville. The show also featured aerial performances by other military and civilian flight teams, live entertainment, and the opportunity to see military aircraft and vehicles and the U.S. Special Operations Command Parachute Team.

The 2019 air show schedule announced is:

Demonstration sites are selected in support of Department of Defense objectives and in the interest of the armed services, with safety as the primary consideration. Performances greatly assist in recruiting and retention goals for the military services, enhance esprit de corps among uniformed men and women, and demonstrate the professional skills and capabilities of the naval services to the American public and U.S. allies.

The mission of the Blue Angels is to showcase the pride and professionalism of the United States Navy and Marine Corps by inspiring a culture of excellence and service to country through flight demonstrations and community outreach. Since 1946, the Blue Angels have performed for more than 496 million fans.

For information about individual air shows, please go to each air show’s official website. For more information about the Blue Angels, including the 2018 and 2019 air show schedules, visit http://www.blueangels.navy.mil.