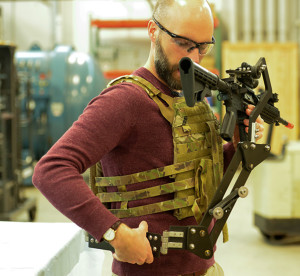 Soldiers may be asked to carry heavier, more lethal weapons in the near future, but they soon might have a “third arm” to improve their accuracy and reduce fatigue.

Using a mechanical apparatus that resembles something out of a sci-fi movie, the lightweight device will help redistribute some of the burden Soldiers carry in their arms and shoulders to their abdomen. Engineers at the Army Research Lab here have been developing a mechanical “third arm” that attaches to a user’s back hip.

The project, unveiled last year at a conference, is scheduled to be tested again sometime this spring with a minimum of 15 Soldiers.

“Right now we have a prototype that’s essentially a research platform that we’re using to investigate different types of materials — how materials and structures can stabilize a weapon or a shield, reduce fatigue on the Soldiers’ arms, but also improve accuracy,” said mechanical engineer Dan Baechle.

The project is currently on its second prototype model with improvements based on Soldier feedback. Some of the improvements include an extendable hinge plate so that a single plate can fit Soldiers of different sizes and body types. Baechle said further research must be completed before the device can be fielded. The current prototype at 3.5 pounds can now support weapons such as the M249 light machine gun that weighs about 27 pounds.

The project not only helps stabilize weapons, but can aid Soldiers for defensive purposes while carrying 20-pound shields. The project team developed a custom mount that connects from the arm to the shield so Soldiers can use the Third Arm to help alleviate muscle fatigue.

Concept development began in late 2015 when ARL engineers brainstormed ideas on how to make a dismounted Soldier more lethal. Engineers began building the first prototypes in 2016. The focus of the project centered on providing stability for dismounted Soldier. ARL engineers are examining different types of spring materials to further balance the weapon against gravity. Baechle said they used a carbon fiber material in the current prototype because of its light weight and density.

Last summer, six Soldiers volunteered to take part in a pilot study, where researchers placed electromyography sensors to measure muscle activity. In particular, when holding a weapon or shield for extended periods of time, the arm begins to shake, impacting shooter accuracy. The six-person research team tested Soldiers firing weapons with and without the apparatus.

“We found that it reduced the fatigue and reduced the muscle activation for some Soldiers,” Baechle said, explaining that data is being used to motivate a larger trial this year with more Soldiers. This year he also plans to get more feedback on what Soldiers think about the device and what should be changed. 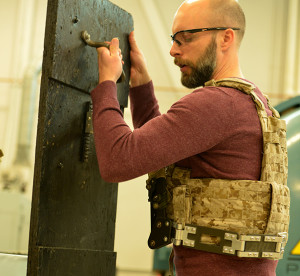 The “Third Arm” project is being developed not only for weapons but for defensive purposes. Army researchers at Aberdeen Proving Ground, Md., created a special mount to attach the apparatus to a shield and also provide stability and balance.

Last year researchers collected data on how much muscles were firing with the use of the third arm compared to without it.

“There are studies showing that, if you hold a weight out at arm’s length, eventually your arm starts shaking,” Baechle said. “And that shaking is going to reduce your accuracy with the weapon … and if you’re holding a shield, it’s going to reduce the amount of time that you can hold that shield. So we’re taking that weight of the weapon or the shield off of the arms and transferring it back to the torso.”

While the test yielded positive results, Baechle said some of the Soldiers had problems with the device. Improvements made this year include changing the mounting location from the front of the Soldier’s vest to the back.

Researchers hope to further improve the device to make it more comfortable and reduce fatigue even more. They are continually attempting to make adjustments to the device to boost a shooter’s accuracy.

Baechle demonstrated how ARL researchers use a motion capture system, using monitors and infra-red targeting to track a Soldier’s weapon and target.

“We use this system to evaluate both how subjects or Soldiers move the weapon and with and without the third arm,” Baechle said. “But also how the arm improves the accuracy or changes the aim point while they’re using the weapon.”

Finally researchers hope the project can reduce some of the recoil force after firing a weapon.

“You have a lighter weight weapon but potentially a higher caliber weapon which normally would increase the recoil on your shoulder,” Baechle said. “Could you use Third Arm and some clever materials on the arm to redirect that recoil back toward the body and thus allow the Soldier to wield a higher energy weapon without necessarily burdening the Soldier more?”