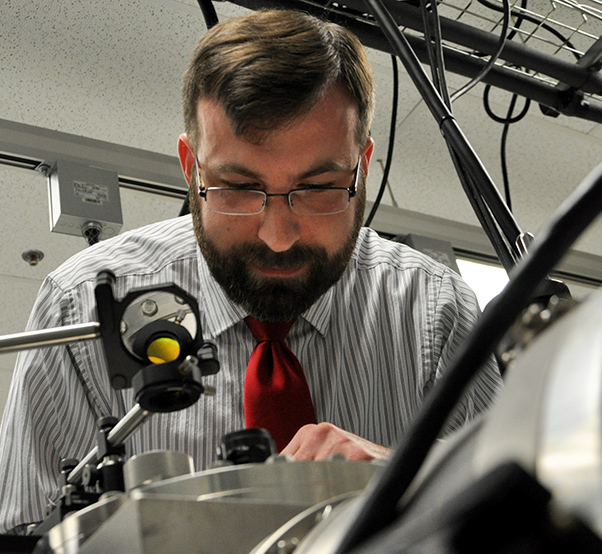 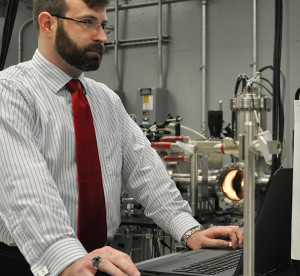 Dr. Willliam Lewis, AFRL Senior Research Chemist with the Turbine Engine Division, Aerospace Systems Directorate, configures the laser to scan an infrared spectrum for the Cluster Assembly and Spectroscopy Instrument. With the CAASI, their lab was able to measure the rotationally-resolved infrared spectrum of the C3 molecule trapped in helium droplets at a temperature of minus 272.78 degrees Celsius.

Science just got a little cooler in the Air Force Research Laboratory.

“Our AFRL team recently scored an important breakthrough and were the first people to see the spectrum of the C3 molecule at record low temperatures [minus 272.78 degrees Celsius],” said Dr. William Lewis, AFRL Senior Research Chemist with the Turbine Engine Division, Aerospace Systems Directorate. The C3 molecule is a soot precursor often found in flames, explosions, and other combustion processes, as well as astronomical bodies such as comets and stars. This discovery is key to improving a variety of models used in propulsion and space vehicle applications, he said.

A few years ago, the Fuels and Energy Branch became interested in carbon from the propulsion point of view. Since then, AFRL researchers have rapidly developed a new research capability to measure the energetics and structures of carbon clusters.

“It’s a way to freeze chemistry,” Lewis said. “This lets us slow everything down. It lets us take what would normally be too fast to even see, then preserve it long enough to see it on a human-perceptible or human-measurable time scale.” 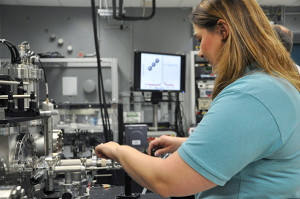 “Normally, when you get carbon, it’s very hot and other things don’t want to stick to it, and you can’t capture that interaction and investigate the fundamental steps of the chemistry. If you get it cold enough, then you can bring the carbon molecule that you are interested in together with some collision partner that would be important for whatever application that you are trying to understand,” said Lewis.

However, the team discovered that it was not all about cooling the carbon molecules to such low temperatures. Previous attempts to study C3 soot precursors evaporated the C3 and then trapped it in solid neon or argon ice. This was a problem when studying precursor structures and chemical interactions because the molecules can’t move in the ice.

AFRL’s method relies on submerging the molecule in a helium liquid, allowing the molecule to still move and rotate. So another key advantage of the new method is the ability to investigate interactions with other molecules and study the structures they make together. This is something that researchers haven’t been able to do before.

“It can still wiggle. The method is able to cool things down – but cool them down in a way that they don’t really perturb the molecular structure, while we use infrared spectroscopy to study the molecules,” Lewis added. 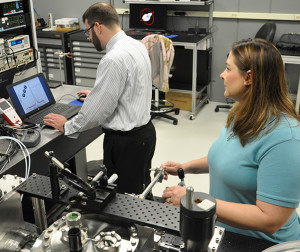 Dr. William Lewis, AFRL Senior Research Chemist with the Turbine Engine Division, Aerospace Systems Directorate, and Barbara Miller, University of Dayton Research Institute Research Chemist and UDRI Team lead contractor, record the infrared spectrum of the C3 molecules at a temperature of minus 272.78 degrees Celsius in the Cluster Assembly and Spectroscopy Instrument. The super low temperature spectrum allows them to clearly determine the structure and bonding in the C3 molecule.

The possibilities are endless. A logical consequence would be to use this data and data from follow-on experiments where they interact it with combustion-relevant and space chemistry molecules and use that data to improve current chemistry models.

“Whether it’s a fuel application in terms of the emissions that are going to come out of a combustor, whether it’s some chemistry that is going to happen in space, what flow is going to happen around a reentering space vehicle, you need to be able to understand the fundaments steps in chemistry. This helps us do that because then we can take the molecules that we are interested in and bring them together, and let them talk to each other and then just listen in on the conversation,” Lewis added.

In the turbine engine community, an improved chemistry model could reduce sooting in emissions and possibly improve combustion efficiency. The space vehicles community would see a different payoff. Carbon molecules that evaporate from space vehicles react with the surrounding air, creating their own type of combustion during reentry. The chemistry in the flow layers around the vehicle changes how it flies. Improved chemical models can lead to an improved ability to control the vehicle upon reentry.