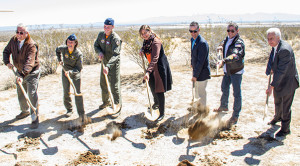 For many, Friday, March 23 was the beginnings of a dream come true.

Military members, local business leaders, state politicians and nearly 100 Antelope Valley residents attended an event that many have been working for more than 20 years to make happen.

Local leaders and several board members of the Flight Test Historical Foundation, armed with ceremonial groundbreaking shovels, broke ground for the upcoming construction of a new Air Force Flight Test Museum to be located just outside the West Gate at Edwards Air Force Base.

The location of the museum, which was originally inside the gates, became a problem after the Sept. 11, 2001, terrorist attacks on the United States which caused security to be tightened throughout the country.

As a result, the museum has been off limits to most, but the location of the soon to be built, larger, state-of-the-art, new building, allows the doors to be open to everyone.

The ground-breaking event was hosted by Lisa Gray, chairwoman of the Board of the FTHF.

Danny Bazzell, general manager of the foundation, welcomed those attending the event and introduced distinguished guests paying special regard to Mrs. Gail Knight, widow of the late State Sen. William J. “Pete” Knight who was also the first chairman of the board of the Flight Test Historical Foundation.

Gray gave a brief history of the museum and explained the need for one on Edwards Air Force Base was inspired in 1982 by Mrs. Carol Odgers, wife of Maj. Gen. Pete Odgers who was the commander of the Air Force Flight Test Center at the time. 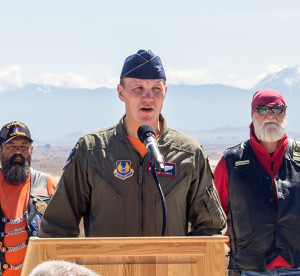 Col. Jason Schott, vice commander of the 412th Test Wing, address guests during a groundbreaking ceremony at Century Circle for the new Air Force Flight Test Museum, while members of the Patriot Guard, Lino Torres and Jim “Kickstand” Jacobs look on. Schott said that the next generation needs to know the long line of Edwards and where they fit into the picture.

Gray said the general’s wife was shocked that the base didn’t have a museum to preserve the artifacts and put them on display for the taxpayers of this country, the people who actually paid for them.

Gray agrees about preserving and displaying these artifacts and said, “What we do here [at Edwards AFB] is what makes us a mighty nation.” She said displaying the artifacts that tell the story will inspire the country’s younger generation to carry on.

Col. Jason Schott, vice commander of the 412th Test Wing, talked about how he recently came across a box filled with mementos he saved through the course of his military career and marveled about how the discovery brought back memories and inspired him to renew his commitment to his service, to his country and to Edwards AFB.

He shared what Edwards flight test means to the future of preserving America’s liberties and said the mission of Edwards is to test and evaluate weapons systems and ensure war-winning combat abilities.

He talked about the contributions of so many men and women who worked to ensure the success of Edwards’ mission and said many of those individuals are no longer with us and talked about the need to preserve their story and share what they have done to bring about the technologies and the equipment and the warfighting needs that makes the U.S. Air Force the best in the world. 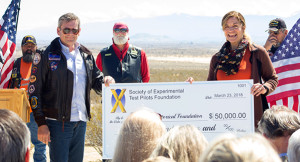 On behalf of the Society of Experimental Test Pilots, Virgin Galactic pilot Mark “Forger” Stucky presents Lisa Gray, chairwoman of the Flight Test Historical Foundation, a donation of $50,000 for the building of the new museum during a groundbreaking ceremony outside Edwards Air Force Base, Calif.

“From the first time a sonic boom was heard in this valley some 70 years ago, to an unending number of test programs that have taken aviation further, faster, higher and more lethal … all of that has been done with men and women who have risked their lives, risked their reputations and put it all out there in order to make our country safer and protect our allies,” Schott said.

“As we build this museum here on this spot, it should help us all preserve that legacy,” he said.

He said the next generation needs to know where they fit into the picture, and said they need to be able to come and touch the artifacts of the past to inspire them to take on the challenges of the future.

Virgin Galactic pilot Mark “Forger” Stucky presented Gray with a check for $50,000 on behalf of the Society of Experimental Test Pilots. Stucky told Gray, “If you build it they will come!”

Gray thanked everyone for past contributions, it’s what got them to the groundbreaking Phase 1, but said they have a lot more to go and asked the public to keep the contributions coming.

Construction on the building is slated to begin early this summer and Bazzell says it’s expected to take 18 to 24 months to complete.

“About a year to build it and another year to furnish it,” agreed George Welsh, director/curator of the museum. Welsh called the long-awaited ground breaking an amazing moment.