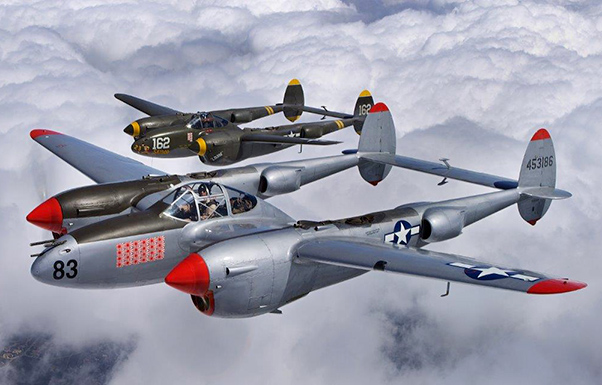 The fifth annual Los Angeles County Air Show at Gen. William J. Fox Airfield in Lancaster, Calif. — appropriately titled ‘First, Fastest and Farthest’ — was sponsored by Lockheed Martin and had as much action on the ground as it did in the air.

Kids of all ages filled STEM tents to fly aircraft demonstrators, color their favorite airplane and even build jets using virtual prototyping. Undoubtedly, many left with a newfound desire for science, technology, math and art.

“My husband and I come for the aerial acts but my kids can’t get enough of the STEM tents,” said Janice Travis from San Diego, while her children Jessica, 5, and Danny, 11, entertained themselves in the Northrop Grumman STEM tent. “I only wish there was a place like this that was open every weekend.” Her husband, Daniel, a plastic surgeon, said that the highlight for him so far, was listening to Joe Kittinger, Art Thompson and Alan Eustace share their adventures of free falling from space and Bob Gilliland, the first man to pilot the SR-71 Blackbird. “These guys are the real deal, right here — it’s pretty cool!” Daniel said he was happy to see that the aviation legends were so humble and approachable. History panels were led by Army veteran and author, Dennis Anderson.

While some guests enjoyed inside activities, others bundled up as they watched classic aircraft, aerobatic flying, parachute jumpers and the famed Red Bull Team. “It just goes to show how dedicated aerospace fans are,” said volunteer, Cathy Hart, speaking of the cool temperatures. 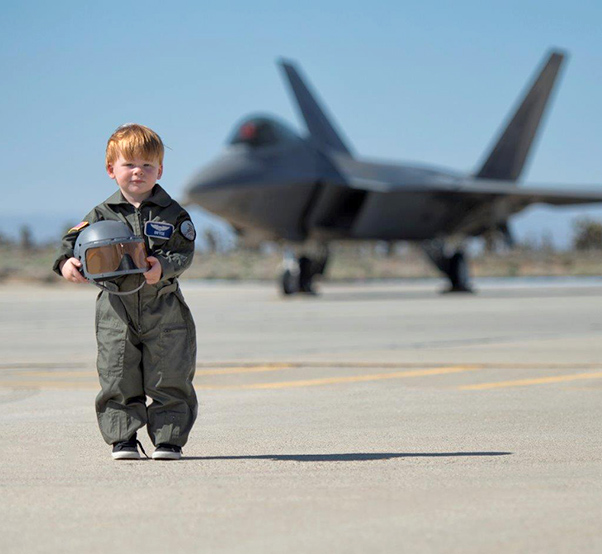 Who is that boy? Bryce Sanden, 4, is the grandson of Bob and Cathy Driver, both Lockheed Martin employees, who host the Photo Tour at the LA County Air Show at General William J. Fox Airfield. This photograph was taken during Family Day at Plant 42 and became an instant hit and is being used in print advertising and billboards. Bryce now sits alongside legends and autographs photos drawing a smiley face until he can master his penmanship.

Guaranteed a front row seat and special access to the aircraft and performers, participants of the Photo Tour walked away with numerous prize photographs.

“Since we work around aircraft every day and see them flying, we sometimes take them for granted, but seeing them never gets old,” confessed Cathy Driver, a Lockheed Martin employee who works at Edwards Air Force Base on the F-35 program. She and her husband, Lockheed Martin graphic artist, Bob Driver, hosted the tour. Guests came from as far away as Germany, Japan and Canada, while many were from the Santa Clarita photo club.

Driver’s grandson, Bryce Sanden, 4, is the little boy appearing in numerous ads and billboards advertising the LA County Airshow. He sat alongside pilots and legends, such as Joe Kittinger, autographing pictures for pilots and guests. He hasn’t fully mastered writing his name, so instead, he signs with a happy face. When he first saw himself on a billboard he looked at it and pointed to himself and the billboard asking his grandpa, “Is that me?”

Lockheed Martin photographers Jonathan Case and Michael Jackson had a rare opportunity to take photographs out of a B-25 named Photo Fanny, capturing two P-38 Lightings flying from Planes of Fame to Fox Field.

Being a huge fan of aviation and getting to fly in Photo Fanny while taking pictures of two Lockheed legends in close formation through the removed escape hatch, was a dream come true and an incredible experience for Case. He said he had to keep pinching himself when they arrived at the airfield to load up and go fly. 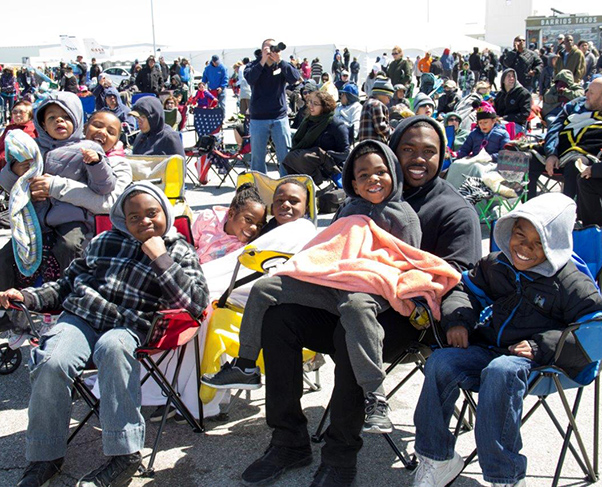 Cold weather and high winds could not keep loyal aviation fans away from the Fifth Annual LA County Air Show at General William J. Fox Airfield in Lancaster, March 24-25, 2018. President of the Airshow, Ronda Perez, said there was a 10 percent increase in ticket sales over last year.

“The sights, smells, sounds, the feelings — everything about the day was amped with anticipation. We had a beautiful, low and broken cloud deck hugging the snow-capped San Bernardino Mountains and the way the white tops of the clouds reflected the light on the underside of the P-38s; we could not have asked for a more perfect day.”

Shortly after takeoff, Case crawled down the tail with his gear and sat in the tail gunner seat to watch the P-38 Lightnings join up.

“It was surreal to sit in that seat and think of the history of the airplane and see those two Lightnings close in on our six. I told Mike I was kind of expecting that Rod Sterling would pop out at some point and explain how we had passed into the Twilight Zone.” Case said that The Planes of Fame guys are professional, aviation enthusiasts to the hilt and love what they do. “It’s not hard to see why. Their routine at the air show is an indescribable display of history and American culture.”

Case thinks everyone’s nine-year old self comes out when they see this team do what they do. Even when looking at the photos he took, he still asks himself if it really happened.

Wrapping up the show, the F-22 Raptor took many spectators by surprise by its outstanding performance. 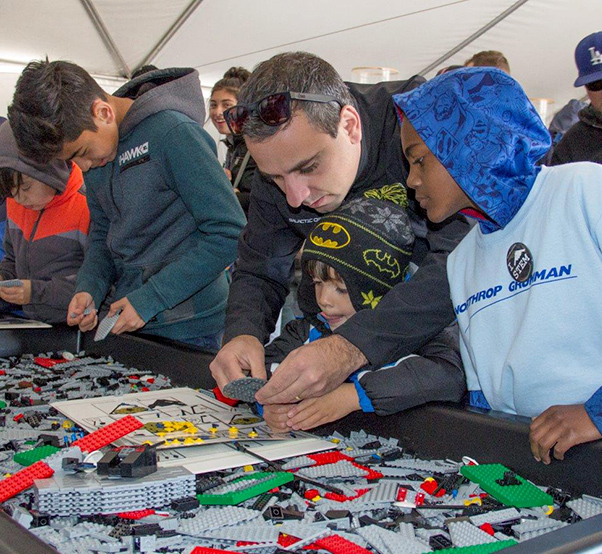 Kids of all ages enjoy STEM tents where they engineered various contraptions using simple materials that they can find at home. They also had opportunities to fly aircraft demonstrators, color and drive robots.

Attendee Jack Cooper said he has been to every show at Fox Field but was hesitant to buy tickets since the Thunderbirds or Blue Angels were not the grand finale. “I had no idea the F-22 could hang in the sky and maneuver the way it did, it was pretty mind blowing.” He wished he didn’t attend on the final day so he could come back again to see the Raptor perform. “That was fricken amazing!”

“We couldn’t have executed the show without our volunteers,” said Fergione. “Everyone did an outstanding job and I have to say, Scaled Composites went way above and beyond to help us by bringing their aircraft to the show.” Flying every version of the F-16 as a Lockheed Martin Test Pilot, Fergione acquired more than 3,000 hours testing the F-16 and over 6,400 hours in various aircraft. He transferred over to the F-22 Raptor Program and retired in 2007. Upon hearing the roar of the F-22 soaring over the airfield on rehearsal day, he said his heart started pumping and didn’t slow down until after it landed. “It is by far the most superior aircraft I have ever flown.” 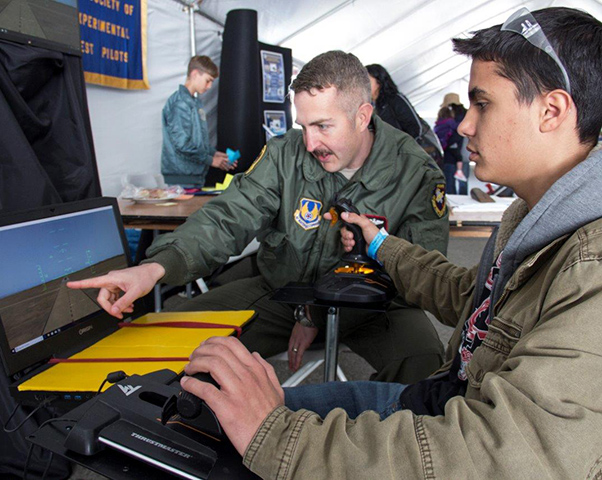 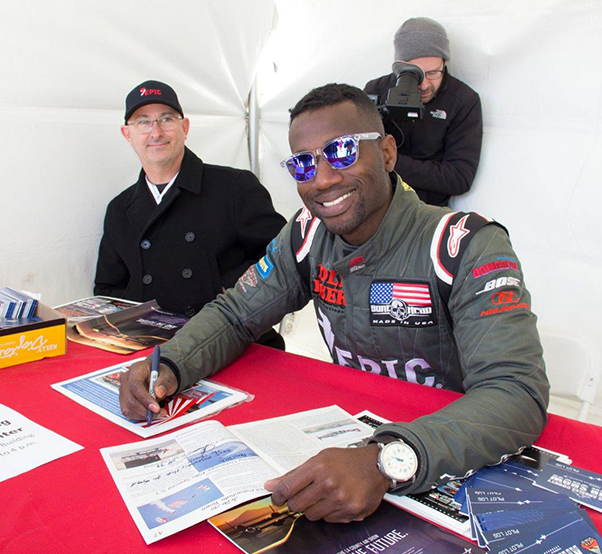