Al Bowers, who is the chief scientist at NASA’s Armstrong Flight Research Center in California, loves to hear about the successes of people he has mentored.

For decades he has been a strong supporter of education and seeding young minds. He often volunteers his time to give presentations to students of all ages, or mentoring a new group of students who could be the next great innovators.

However, on April 28, it was Bowers who was surprised. A local honor at the International, Leadership, Entrepreneurial Development, Arts and Design Thinking K-12 organization (iLEAD) Schools Vision in Education benefit dinner became even more special with recognition presented from the California Legislature and the U.S. Congress.

“The iLEAD award is expressly designed to honor those rare individuals who by visionary hard work and fearless leadership have forever positively impacted individuals in education,” said Kathleen Fredette, director of arts and design activities for the iLEAD. “Al brought Prandtl to my class prior to me joining the iLEAD team, and he has been one of my biggest cheerleaders, welcoming me into the aero community without reserve.”

In addition to speaking to iLEAD students and assisting Fredette with integrating more complex concepts into an aeronautics and soaring project, she said he also is supportive of her personnel goals.

“He’s been especially supportive of my (sailplane) piloting journey and listened when I hit walls, encouraged me when I felt like it was too much and also didn’t accept excuses,” she recalled.

An example of why Bowers received the award is evident in the experiences of a current Pathways student he has mentored. University of California Berkeley student Loren Newton’s technical paper detailed work he did as Bowers’ intern. Newton processed flight data from the Prandtl aircraft into a quantitative model of the aircraft wing’s unique flight dynamics. The paper based on that data was judged as the best student technical paper in its category at a recent American Institute of Aeronautics and Astronautics event.

“Saying Al ‘helped’ me would be an understatement, he’s a main reason why I ended up at Armstrong,” Newton said. “Almost four years ago, my high school science fair project ended up in his hands; almost solely on this basis he took a chance on me and offered me an internship position while I was an inexperienced college freshman. At Armstrong he related stories to encourage us to dream big and inspire us to make a difference. It is no coincidence that interns look up to Al so much. He combines a rare blend of brilliance, passion, character and humility.” 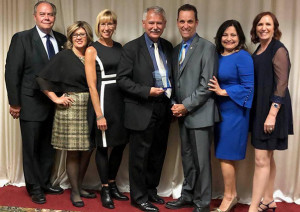 Bowers is seen as a great mentor and also as an inspiration for the presentations he gives students at all levels of education and the knowledge he imparts. It’s the way he allows students to use their critical thinking skills to solve challenges and to discover for themselves the answers to their questions that makes Bowers special.

In one presentation, he explained the Cassini Spacecraft revealed that Saturn’s moon Titan has rainfall cycles like Earth and has the only known lakes and seas in the solar system other than Earth. Scientists around the world are trying to figure out how to get a boat on the river Thames on Titan. He asked the students, “What do you want to do with your life? Don’t you want to be one of the students working on this right now? It’s to motivate them to open their minds to alternate realities that they could create.”

Project-based learning has students encounter problems and find answers, he said. It’s a philosophy that Bowers supports in his mentoring and a way he tries to encourage and inspire people in his presentations.

“The answer might be far beyond students’ ability to solve the problem,” he said. “That’s OK, a number of them figured out the problem. You can find lots of people who get you the right answer to a problem. But the hard thing is to find the right problem. I want these kids to know, they have asked the right question and they are on the right track. The critical thinking skills that they need right now are the same that will always be needed.”

The challenging tasks on the Prandtl-D aircraft is an example of how Bowers chooses to mentor. The students’ work has been a key part of the project that has shown that future aircraft can become significantly more efficient by using a wing design that includes a real and metaphorical twist on conventional wings.

“Here’s an idea that is so radical and so different and Armstrong Director David McBride and Center Chief Technologist David Voracek took a risk funding the idea,” he said. “There was a real opportunity where we could use interns as the workforce. In many ways the Prandtl is a microcosm of the bigger projects we have here. We go through design reviews, documents and answer questions like how we make these things fit together?”

The greatest challenge with a student workforce is schedules are very real and the work has to be in a condensed timetable that coincides with the 10 weeks or so before the internships end, Bowers said. To meet some of those challenges, Bowers and center staff work to prepare for when the students arrive so students can get right to work.

There are real-world implications of Bowers’ interns work. 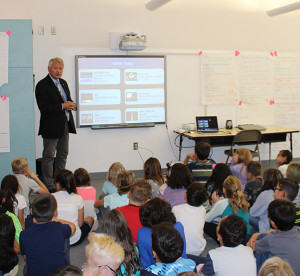 Al Bowers talks to an elementary school class in New Mexico as part of NASA’s outreach to students.

“I try to turn these endeavors into teaching moments so that they understand this is a real problem, which happens on our big projects that things don’t work out the first time, every time,” he said. “Many times students get a piece of data from the airplane that no one in the history of the universe has seen. It is their job to explain what they found.”

To see students and former interns succeed is his biggest success as a mentor.

Jennifer Cole, who is Armstrong’s Aeronautics Research Mission Directorate chief engineer and Advanced Air Transportation Technology senior adviser for flight, was mentored by Bowers in 1998 and 1999 as a summer student and again when she began full time at the center in 2000.

Bowers’ insight and guidance have been valuable during her career when she is looking for a perspective that’s grounded not only in facts, but also the context of why, she said. For example, Bowers was chief engineer of a subscale research project called the Blended Wing Body when it was discussed as a possibility for a human-piloted experimental vehicle.

Cole was interested in disagreements between industry and government. Bowers explained the project’s history and how the goals and interests of government and industry drove the perspective on requirements. Part of that discussion was how government seeks data sets, tool validation and dissemination of the research to a broader audience, where industry is focused on confirming new configurations are solid and could lead to commercial product success.

“Al has this way of giving objective information required to understand both sides of the coin,” she said. “He is very approachable and a fantastic storyteller and can present a story in context of the political environment or constraints to help shed light on why choices were made. At the end of the story, I gained perspective and had some of my assumptions challenged.”

“I never hesitated to ask him a question because I knew he would not judge me,” she added. “I always appreciated that he does not tell you the answer. He will pull you in a few directions by telling you of an experience, insight, or knowledge that resonates and helps you decide on a course of action.”

Bowers hears from prior interns often. One just messaged him that he graduated and is working for a GPS company. Three interns went to work on Cassini and four more are working on the Space-X Falcon heavy rocket.

Bowers has been recognized for his mentoring as a three-time winner of the NASA Armstrong Henry Arnaiz mentoring award. Armstrong peers also award Bowers the Pride in NASA Award and a project engineer award. NASA recognized his work with Exceptional Service Medals for the X-29, F/A-18 HARV and the X-48. NASA also recognized him with its Exceptional Achievement Engineering Medal in 2016 for his work on the Prandtl aircraft.

Engineering is his passion and so are the opportunities of sharing that with the next generations.

“I love talking to kids,” he said. “Their enthusiasm is contagious. They ask questions I never imagined and they have incredibly curious minds.”