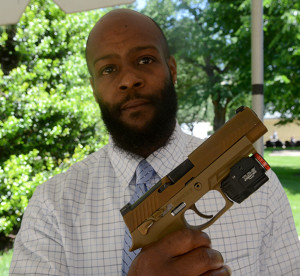 Curtis Brookshire Jr., a systems engineer at Program Executive Office Soldier, shows the Army’s new Multifunction Aiming Light, mounted on the rails of a Modular Handgun during the “Close Combat Lethality Tech Day” demonstration, at the Pentagon, May 24, 2018.

One of the most fundamental skills an Infantry Soldier must develop is the ability to quickly and successfully engage an enemy target.

Brookshire spoke during the “Close Combat Lethality Tech Day” demonstration, May 24, at the Pentagon.

On a display table beside him was an M-4 carbine and a new Modular Handgun, each equipped with a variant of MFAL. The MFAL on the carbine was about twice the size as the one on the handgun.

The MFAL, Brookshire said, sports both infrared and visible aiming lasers so Soldiers can more easily put bullets on target during the night and day.

PEO Soldier has actually been working on a number of MFALs over the last several years, he said.

What makes these new ones different is that they are smaller, lighter and more powerful, he said, showing some previous versions on the table which were about twice the size of the new versions.

Additionally, lithium batteries in the devices ensure they last much longer when out in the field, he said. Run times for the devices are about six-to-eight hours, the duration of a typical patrol.

Having a lighter and less bulky MFAL helps Soldiers more effectively engage targets, he said, because the weight of the weapon in the firing position is reduced.

The maximum range for the visible and IR beams on the Modular Handgun MFAL, he said, is 25 meters.

The daytime range for the M-4 MFAL is up to 200 meters in sunlight, he said, with the IR beam reaching 600 meters at night.

Since the Soldier using an MFAL doesn’t need to look through a night vision scope anymore, he or she could fire from the hip or any other position because the beam aligns with the bore and points to the target, he said.

A group of Soldiers earlier this year tested the new MFAL at Fort Belvoir, Virginia, where PEO Soldier is located, he said.

Feedback on the new MFALs was positive, he said. Soldiers were able to acquire and hit targets three to five seconds faster than without the MFAL.

Also, Soldiers said it was much easier to see where the laser was pointing in bright sunlight, compared to previous models of MFAL, he said.

The MFAL is particularly useful when acquiring targets while wearing protective masks during a simulated chemical or biological event, he said. Without MFAL, it’s difficult to sight in because of the sight obstruction caused by the mask.

Next year, the Army plans to purchase a number of MFALs for its M-16 rifles and M-4 carbines, which are considered a higher priority over the MFAL variant for the handgun, he said. The purchase quantity has not been decided, but the production run will be three to five years, on an indefinite delivery, indefinite quantity contract.